This summer trip had its origins of wanting to visit the Shorts Brewery in Bellaire.  I convinced some friends to come in from out of state, so we started off with an overnight stay in Traverse City, with the airport there.  I’d had a couple Traverse City brewery beers at the Michigan Beer Festivals, so I had 2 points on my map to hit.  With some very basic research, I came up with a nice, easy walking tour that hit several good stops. 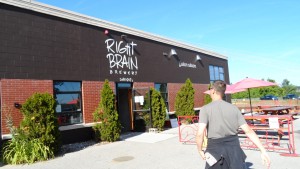 Right Brain Brewery.  This was in a large industrial building off to the side of a residential area.  A nice, easy 20 minute walk from our hotel downtown.  The building looked pretty new and was nicely painted 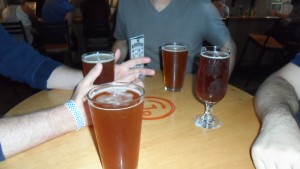 and done up inside.  It was a large space, and made the bar at the far end look almost under-sized for such a large building inside.  Interesting art hanging around added to the atmosphere.  I had an IPA that was quite good, but didn’t get a chance for another or to try something different, as one of 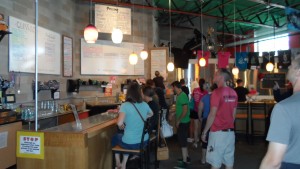 my travelling buddies was jumpy to get to the AT&T store to try to repair his iPhone that mysteriously had stopped working.

Brewery Ferment.  This was back into the downtown business area, on the edge as we left the residential area.  Although this was directly on our walking path, it was not a planned stop.  However, the inviting old fashioned storefront feel to it was alluring, and when we found out the AT&T store was across the street, that sealed the deal.  The brewery is pretty new (couple months, if memory serves me correctly), and their freshly opened building clearly showed the
newness with the bright, light-colored wood flooring.  At the small bar, they only had a couple options, and I of course had the “most IPA-like” thing they had.  It had a fresh, raw, taste to it that actually

complemented the fresh, woody feel of the décor coupled with historic pictures on the wall of Traverse City in the olden days.  This was the same beer I had at the Summer Beer Festival and gave it 2 out of 5 stars.  In the brewery, I say it was up in the 3.5 – 4 stars out of 5 range.  Fresh beer tastes great, almost no matter what kind it is, and an attractive environment helps tweak your brain’s experience as well.

North Peak Brewing.  I’ve had several of these beers in the past at beer festivals and they were always high quality, plus they have a good distribution in the state, so I’ve bought several at my local party store.  They had a big footprint, with a large space inside an old historic looking brick building that had lots of warm wood colors on the floors, tables, and chairs.  We sat outside in a sort of beer garden layout with a lattice overhead structure and open-air walls.  There 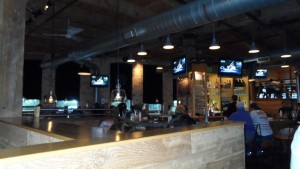 was a band playing at the far end, and we had a good meal outside while enjoying some beers.  The scenery wasn’t all that special as the beer garden sat between the large parking lot and the main road.  But the good beer and food allowed us to overlook that. 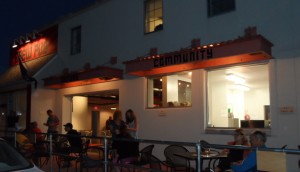 Workshop Brewing.  This place got added to our list during the tour.  Right Brain had a handy little “breweries of Traverse City” pamphlet that showed the in-town breweries, and at another stop someone pointed out The Workshop Brewing Company was brand new, having only opened a couple days prior.  So we stopped off there and found a
brightly-lit industrial type building with lot of use of the color red and silver.  The place was fairly empty, still being new.  And they only had 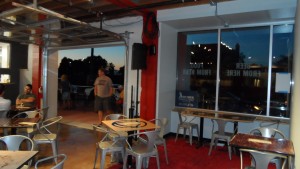 2 beers on tap so far.  The beer was good, and they seemed to have an interesting menu for food, so hopefully they do well.  We had an interesting conversation with the owner about his glassware.  He said he only wanted to stock 1 type of glass, not manage different glassware for each style.  So he picked the glass that would best showcase his beers, which was the tulip glass.  We had been having a discussion earlier 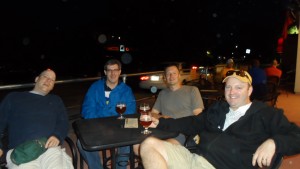 that evening of the tapered-in cone at the top of the glass and how that made IPAs taste great (funnels the hop aromas to make a more concentrated cone directed right at your nose).  I, of course felt vindicated that my opinion was vetted by the owner’s selection of glassware.

7 Monks Taproom.  This was our last stop of the night, as it completed the natural loop progression of our tour before hitting the hotel.  It was in the heart of the downtown business area.  I’d heard lots of good things about the place, and as we walked in, I saw that many other people had, too.  It was filled with many a beer reveler, enjoying various on-tap beers.  I believe they have a minor specialization in Belgian beers, as you would assume by the name.  But knowing my dislike of the yeasty flavors there, I steered toward my usual IPA selection.  They had a few, and of course would give you tasters- as any good beer bar should.  I had the Griffin Claw IPA, which was awesome.  I don’t know if being the last beer on the beer tour sets you up to be the best of the night, or the most non-memorable.  But I now have this new brewery added to my list of favorites and will seek it 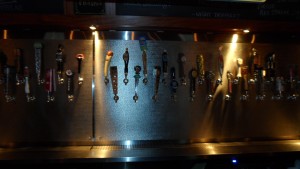 out at the next Michigan Beer Festival, or if it shows up in the store.  The atmosphere inside the place wasn’t all that special.  You definitely go there for the beer.  The inside was rather non-descript collection of tables and booths, lightly colored, low lighting and high “industrial-like” ceiling.  It didn’t feel very “monkly”, but the beer overshadowed the décor.