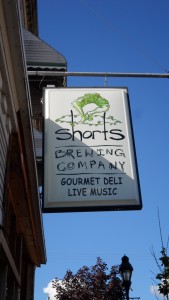 After enjoying a good tour of Traverse City beer joints, we headed east to Bellaire.  Bellaire is a small town, with a tiny 2-block main street with a handful of shops/restaurants.  It seems like a sleepy little town, until it comes around 4-5:00 in the afternoon when Short’s starts getting packed.  We found a great rental house that was walking distance (~1/2 mile) from Short’s.  It was a palatial “cabin-like” 3500-sq ft 5 bedroom, 3.5 bath house with a giant screened in porch, deck, and private backyard backing onto a canal.  The first night we strolled down the street around 7:00 thinking we’d hit Short’s.  Our naivety was soon realized when we saw a crowd standing on the sidewalk outside Short’s.  Walking by their giant picture window front, we could see it was filled to the gills.  After a brief walking period surveying our dining options, we ended up at Lulu’s.  This was a great restaurant with very good atmosphere, 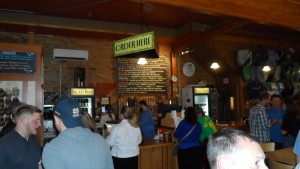 amazing food, and a good beer menu with a few on tap and good select craft beers in bottles.  Our dinner ran late, so on the walk back to the house, we were able to find a spot to fit in and order a round.  The Huma Lupa Licious of course was amazingly delicious. 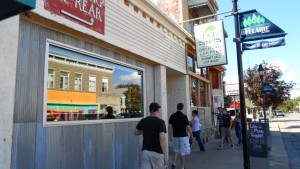 The next night, we planned ahead and hit Short’s around 5:00.  The place was busy/full, but we were able to squeeze in at the end of a long table with our party of 5.  Short’s Brewery Pub in Bellaire spans 2 side-by-side buildings that they obviously blasted some holes in the joining wall and made it bigger.  You’ve got all the great red-colored historic brick walls, and a number of high tables with chairs, and old hardwood large board floors.  There’s a moderate-sized bar in one building where all the ordering of food & drink is done (and this actually flows quite
smoothly/quickly for as big as the place is), and the ordering of all of your great Short’s logo wear is sold that is up on display on the wall.  The joining building was lower tables and had a stage at the end with live music.  The menu had some sandwiches and pizza.  The pizza was awesome.  We had a few pints of some of the beers we thought sounded great, and a few of us also did 5-glass taster because there were so many we wanted to try but a pint of each would be devastating.  Every beer coming out from behind the bar had that 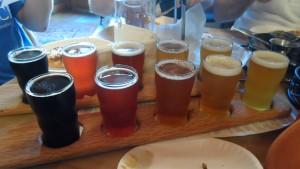 magical glow of freshly-made deliciousness that made you drool as it went by.  By far my favorite was the Awww Jeah (double Huma Lupa IPA).  It was 9.5% ABV, but the taste was very well balanced, not quite as hoppy as the Huma Lupa straight.  Of course the 9.5% ABV took its effect later in the evening as we were sitting around the campfire and watching the clear starry night.  Definitely worth the trip- but make sure you show up early and get a seat.