I hadn’t been to one of the Michigan Brewers Guild’s beer festivals in what seemed like a very long time.  Kevin & I are regular attendees at 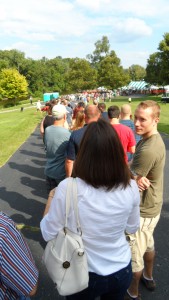 This year’s festival didn’t disappoint, either.  We went to the Friday evening session (5pm – 9pm), since we didn’t get our plans together until a couple weeks prior and all of the Saturday tickets were sold out.  It was a nice sunny summer afternoon, and as usual, the weather was perfect.  We had good “long Michigan summer daylight hours” providing sun for great atmosphere, but being far enough away to not melt us while we meandered about the park sampling beers.  The venue had expanded.  Each year it seemed it got a little bit bigger with another tent here, or another offshoot serving area there.

This year, the back corner along the river went back even deeper into the park.  Far enough that they had to put in 2 music areas.  The main

shelter had a good band playing near the entrance, but as you moved to the back area, you couldn’t really hear/enjoy the music so they put a girl with a guitar and a microphone to provide live music to the rest of the area.  In addition to the new bigger area, and 2nd live music artist, we noticed there were a ton of new breweries.  It seemed like most of the breweries were ones we hadn’t heard of before.  Of course I knew about the ever-growing Michigan brewery list, and the newbies seemed to be well represented.  So we still hit our known favorites, but we also sampled a lot of new breweries.  Some good, some not so much.  But it added some new places to my list of breweries to visit on future road trips.  Which its always good to have a list like that when travelling around the state with the family…  “What?  There’s a brewery in this town?  I had no idea.  I guess we can go eat there.”  My ratings below… 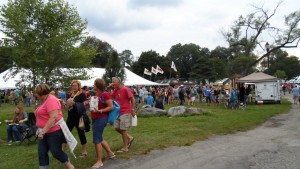