After having a major disaster where I dumped a bunch of garden hose water into what otherwise would’ve been an awesome IPA, I made a couple changes to my equipment.  I changed the fittings on my wort chiller from a simple worm screw clamp solution on a smooth copper tube to a compression fitting mating to the copper coil, and then the plastic hose was press fit over a barbed fitting.  In addition to that, I modified the copper tubing routing so this fitting no longer would stay inside the boil pot, but instead would overhang the outside edge of the boil kettle.

The connection seemed like a super-robust solution as I checked it out when I made the change.  It wasn’t until I did my dual brew day batch where I was chilling two batches with this one wort chiller that I found a new issue.  The hot end 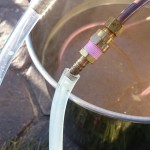 of my wort chiller (the output side after it goes through the hot wort) had the hose sliding off just with the tug of gravity.  Luckily it was toward the end of the chilling phase so the hose was starting too cool down, shrink, and no longer slide off.

So in the future it’ll be belts & suspenders, and those barbed fittings will also get hose clamps on top of it….