There are different types of LP regulators out there, and some function differently.  I stumbled across this on brew day as I was using my new propane burner.  It came with its own regulator and it looked slightly different than my old one.  I didn’t think much of it and just used the new hose/regulator with the new burner.  But I found the function of the adjustable knob on it was different. 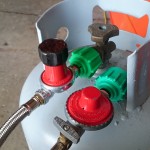 Instead of being an open/close valve (with variable opening amount in between), it actually adjusted the pressure regulation.

This wasn’t intuitive at first and I was frustrated by the fact that I now had to turn the knob in the opposite direction I was used to.  Bigger flame on pressure regulator meant turning the knob clockwise.

After getting my brain used to turning the knob in the opposite direction, the other issue I found was turning the flame off took a lot more turns of the knob, and it felt somewhat disconcerting that the flame went out before the knob was fully turned all the way it could go.

Not realizing that the new one with the pressure regulator adjustment gave me greater gas flow capability (adjusts up to 30 psi), I switched to the other one that I was more familiar with.  But when I went to boil the wort, I didn’t get any speedier boil than with my older/smaller burner.  So in the end, I switched the lines again.

In the end, it’s worth understanding the function of the adjustments on your propane line because just because the fitting on the burner is the same and the propane tank is the same, what you put in between can have an effect on how well you can use your burner.