I like brewing outside in the winter, just like any other time of year.  Yes, I have to wear extra layers, and maybe I spend a bit more time inside keeping an eye on my brew through a window in my house, but I don’t let the weather stop my brewing.  Last winter I was making a batch and all was going well until I was ready to cool the wort.

I noticed something was up when I was grabbing the hose and it was noticeably very stiff and I had a hard time stretching it over to where my brew pot was sitting to hook up the wort chiller.  I turned on the water and got nothing.  There was water frozen solid in the hose.  I tried the other hose and found the same thing.  I then decided I would bring the hose inside and run hot water on it until I thawed out the icebergs.  That then took 30 minutes and was not fun.

So this winter, I bought a collapsable 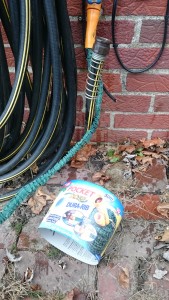 “pocket hose”.  I keep it inside with my homebrew kit and when it’s time for wort chiller action, I bring it out, hook it up to the faucet and am ready to chill.  It worked well, and was much better than monkeying around with a frozen garden hose at a time when I’m trying to chill my wort fast.