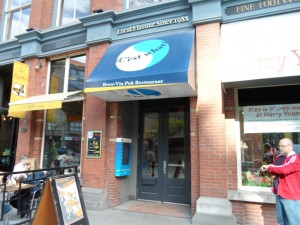 I’d seen ads for C’est What in some brewing news magazines and newspapers.  I can’t remember what attracted me from the ads, but it was on our list for a visit.  Good thing we had GPS or some sort of directions to find it, because it was nothing more than another sign on the street in a short strip of a couple cool-looking restaurants.  C’est What is in the basement.  So going down the stairs you come into a rather large, expansive basement bar.  There were 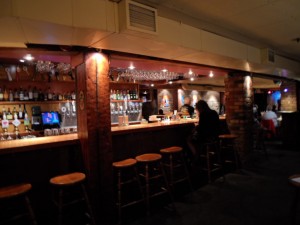 about 2 – 4 rooms all joined through large doorways/openings, but some exposed brick walls separating them.  There were 2 long bars, some pool/foosball tables, and a bunch of tables for eating and/or drinking.  C’est What specializes in craft beer.  I think they were all Canadian, a lot of them local.  Everything was on draft, not sure if there were bottles.  Website says 36 beers on tap, which seems about right.  A few of them they brew themselves.  We had several different things, all of them good.  And the amazing thing was just seeing the trays of beers the waitstaff was loading up to take out to customers- yellows, browns, coppers, blacks- all colors with a nice fresh frothy head on top.  Everything looked absolutely delicious, even if I didn’t know what it was.  And the beers were all good sized, Imperial Pints. 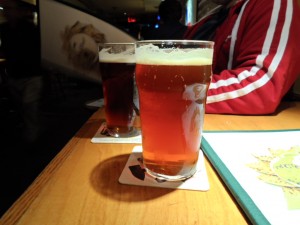 As Wikipedia just told me, the UK-sized Imperial Pint is 568 ml (19.2 US ounces), while the US Pint is 473 ml (16 US ounces).  We found out after that, that Toronto was big into the Imperial Pints, and anywhere we ordered a draft beer, we got this gigantic glass of beer.  It was almost intimidating at times, but we managed.

Funny enough, when we were planning to go to Toronto for beer, we were planning on visiting the Steam Whistle Brewery.  The beer is one of my favorites from Canada.  By the time we got up there, and headed out of the hotel, we found they were closing in about 45 minutes and they were a 20 minute walk.  So in the end, we missed out visiting them.  I’m assuming the brewery is cool (it’s in an old train roundhouse I think, so how can it not be cool), and I’m sure fresh-from-the-source works well there and it’s delicious. 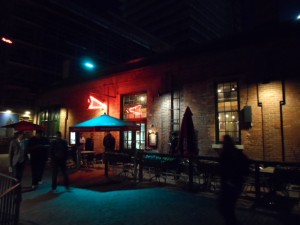 We visited various other locations in the evening.  The only other place of mention was the Mill Street Brewery.  It’s in the Distillery District, which is a very cool location.  I didn’t take the tour or anything so I can’t tell you all the specific historic details of the place.  What I can tell you is that it’s an area filled with big old red brick buildings, warehouses, and what appear to be old industrial areas.  Of course, one can assume from the name that these buildings used to be distilleries.  There appears to be an ecclectic collection of interesting of shops, art stores, restaurants, and some bars.  The notable beer 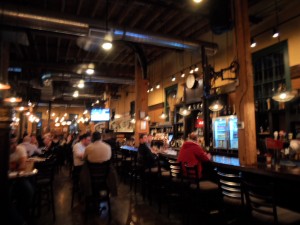 joint we visited was the Mill Street Brewery.  It was a very cool place, with high ceilings, lots of dark wood.  There was a huge bar, lots of tables for eating, and a giant area in the middle with large brewing boilers behind glass.  With this being the last stop of the night, and after a fair walk, I can’t tell you a whole lot about it because we were pretty beat.  But definitely a place I’d go back to check out.