Southern Tier Brewery in Lakewood, NY (and side trip to Fatheads Cleveland) 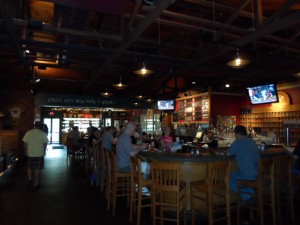 On the drive from Detroit to Lakewood, NY, almost exactly in the middle is Cleveland.  And having frequented the original Fatheads in Pittsburgh’s Southside several times, I knew that the halfway point stop off to visit the new Cleveland location would probably be worth it.  Unlike the Southside location that’s smack dab in the middle of a very cool neighborhood with lots going on an interesting architecture, the only thing Fatheads Cleveland’s got going for it is its name and its building.  On the corner of a major thoroughfare, Fatheads anchors a rather non-descript strip mall.  According to their website, they’ve got something like 32 beers on tap.  That didn’t 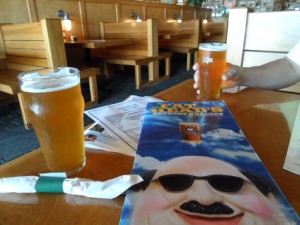 distract me much, as my eyes caught the name of a beer I remember being great in Pittsburgh- Fatheads Head Hunter IPA (7.2% ABV, 87 IBU).  It was equally delicious here.  Worth the trip, but hard to leave after just one on a lunchtime pit stop.  Of course the food menu is equally amazing in its own way, with every sandwich creation you read on the menu making you say, “No, this is the one.  I’m going to order this one…”  Anyway, on to the main trip. 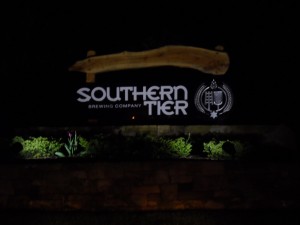 We drove into town and checked into a hotel in Jamestown, NY.  That’s the nearest town with a few hotels near the Southern Tier Brewery, and Jamestown is rather small with a population of 30,000.  We called a cab and got a ride out there.  The ride was an interesting “alternate tour” of Jamestown as our cab driver told us all the side highlights of Jamestown.  Coming into town it was obvious they were very proud of Lucille Ball being from Jamestown with murals   everywhere, a museum with a line of tour buses outside, etc.  Our cab driver told us Lucille was a woman of bad reputation in the town, and she got to Hollywood by sleeping with the mayor.  I wondered why this ~21 year old had such a chip on his shoulder about Lucille and figured it was just resentment that the only thing in town that brought in tourists and visitors was Lucille Ball.  So we shrugged it off.  Then he told us that as it was the weekend, the one hotel in Lakewood would be pretty booked/full of course.  When we asked why, he gave us an “of course” type story that it was because the drug dealers come in from out of town to set up shop there because the hotel was cheap.  Nice.  Glad we were staying in Jamestown.  The town, as it turned out, had a good collection of bars and nightclubs all in good close walking distance of each other and a nice relaxed feel to the nightlife there.  So we had a good time. 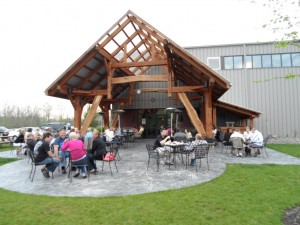 But on to the brewery.  It was way out of town on its own in an industrial type building.  Obviously it was made for brewing, but they squeezed in a small indoor bar area with a couple tables and an area to sell T-shirts and other assorted logo stuff.  The bar had a nice feel to it, rather woody, but relatively new feeling.  The outdoor area was quite nice.  There was a huge outdoor roof that covered several tables, but was high enough up to make it very open-air feeling.  Since the weather was nice the grassy area also had several tables/picnic tables sprawling out around leading up to a nice-looking rough-cut wood stage.  I assume they have nice concerts at some point during the outdoor-weather season, which would probably be nice.  The place had a very nice, clean, “upper middle class” feel to it, but it was a mix of middle aged professionals, younger generation folks, and some “working class” construction workers. It was all a very laid-back feel, so the eclectic mix seemed just fitting.  The beer of 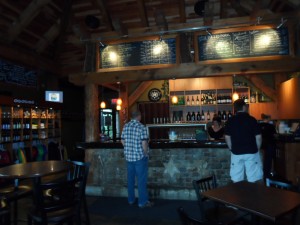 course was good, although not overly amazing, which I was surprised at.  There are a few beers of theirs that I buy in the store and I really enjoy, so I figured it would be truly awesome at the source.  In the end, they pretty much tasted like they taste when I buy them in the store, which is fine because they were still good.  The place really started picking up and getting busy at dark, so we were thinking the 10:00 closing time must surely be a guideline, not a rule.  We were wrong.  Within several minutes of the 10:00 last call, the packed place really cleared out.