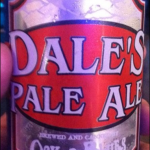 Moderate sweet smell with a bit of hoppiness. Full flavored sweetness that finishes off with a combination of hops, malt, and flavor of high alcohol. Aftertaste is a bit sweet, slightly harsh. Calls itself an Imperial Red IPA. Not sure which word the imperial goes with. Flavor-wise, I think it’s an imperial red that’s also hoppy. 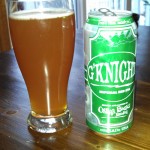