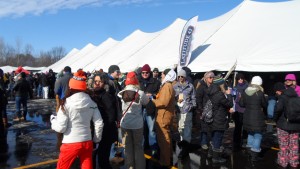 Ticket sales for the 2014 festival were crazy.  We knew the trend from previous years with it selling out in record time, more quickly each year.  2013 Sold out in 13 hours.  So Kevin & I were prepared.  There were 4 of us going, and they were limiting sales to 2 tickets per person.  Sales went live on the web at 11:00 am on a Sunday.  We immediately tried buying tickets and ran into massive delays and purchase pages timing out before we could complete sales transactions.  Eventually we got through and were some of the lucky ones in the 3 hour frenzy.

We followed the pattern we’ve worked out for the Winter Festival of driving out Saturday morning to Grand Rapids, attempting to check in to the hotel, then getting layered up in our outdoor cold gear and grabbing a quick bite to eat in town.  The city was offering bus transportation to & from the festival this year, so we bought tickets for that rather than going the taxi route.  Standing in the massive long line waiting to get in, I took a mental note that next year, rather than being the guy standing there jealously watching someone drink a beer, I’d be that guy drinking a beer.  I still find the pretzel necklace thing too trendy for my liking.  I tried going the route of a bag of beef jerky and granola bars.  But that was just a pain in the backside having one more thing to lug around.

As we got in through the gates, the sun was shining and a lot of the massive amount of snow that mother nature had dumped on us in Michigan this year was melting and running away.  So the parking lot was a mix of giant ice chunks, hard-packed snow, and slush.  The wind was whipping so although the sun looked nice, it was a pretty chilly year.  We had the usual fun randomly going from tent to tent and 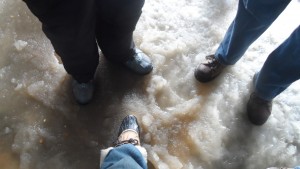 finding a brewery that looked interesting but didn’t have too long of a line.  Everything we had was generally pretty good (ratings below).  We had planned that we would take one of the earlier buses back into town to avoid being over-alcohol’d and thus waste the Grand Rapids downtown nightlife.  So we took the bus back and got into our room and changed to slightly less wintery garb- but still warm enough for our walking tour.

We had hoped that getting back early we’d be able to make it in to HopCat and get some of that delicious Mac n’ Cheese with chorizo and jalapenos.  As it turned out, we could get in, but not a table or chair to be found anywhere (or at least empty).  We walked around in 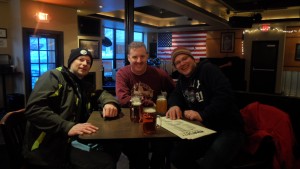 the area a bit, confronted my multiple places overflowing with people until we came to The Back Forty Saloon.  It looked decent enough inside, but in contrast to everywhere else, was pretty much empty.  The menu looked decent enough, and although the tap selection was far from inspiring, it of course had Founders on tap so we stayed.  The
burgers were really good, and the Founders of course delicious.  It started to fill up slowly by the time we were heading out.  Apparently it typically got busy later on as it had live bands playing country music on the weekends.

Next stop was what is always a mandatory stop, Founder’s.  It of 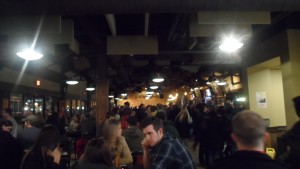 course was crowded, as it was also on other people’s list.  Luckily, we were dressed for walking around outside in the winter, and the recently added massive outdoor beer garden/deck had the propane heaters fired up and blazing.  So we enjoyed some outdoor fire/heat while sipping on our fresh Founders outside.  It worked out quite nice.

From there, we headed back across the giant parking lot and down the alley to Stella’s Lounge.  This place had a really feel to it, with a giant long bar running the length of the place, and a number of tables

paralleling it with places to order food.  It had a kind of 50’s rock & roll bar feel to it with its colors of black, white, and red, and an interesting collection of 80’s era video game machines.  It was packed and there were people standing, apparently waiting for tables.  We saw a table at the end with no one sitting at it, but a giant stack of menus piled on the table.  We looked around, and there was no seating hostess, and it seemed to be first-come, first-served.  So we decided a giant stack of menus wouldn’t 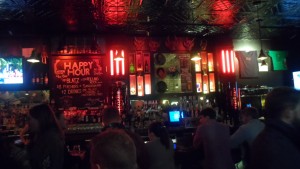 keep us from drinking so we sat down at the table.  A waitress quickly came along and cleared the menus and got us a round of drinks.
Shortly after we started to notice the dirty looks from those waiting.
One girl passed by our table on the way to the bathroom and called us table thieves or something and kept on going.  Later we talked to one of the angry mob to find out if they had a waiting list or a hostess or anything and they said no.  Basically everyone thought the end table was off limits because of the pile of menus so they had not sat down.  We were the target of their frustrated waiting when we took it upon ourselves to not be intimidated by a pile of menus.  After a couple of rounds, we moved on.

Next stop was Grand Rapids Brewing Company.  A new addition to Grand Rapids, they had set up shop on the same block on Ionia street as the infamous Hopcat.  They had re-done the interior of the bar to look like an 1800’s general merchandise store with lots of warm-colored wood and a beautiful bar.  OK, I suppose an old hardware 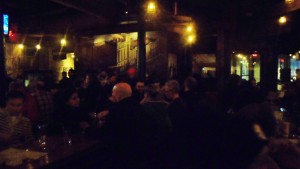 store probably didn’t have a giant bar, but it seemed to go with the rest of it, that I just embraced it.  By this time, the multiple rounds were starting to weigh on me, so I opted for a lighter beer.  I found Sliver Foam, a 4.5% light lager.  It was amazingly delicious.  Tasty malt flavor, but very clean finishing, it went down so easily.  It was just what I needed at that point.  It was so good, it made me want to explore other beers on their menu, but I couldn’t bring myself to divert from something that was already proven to be a home run, and that was this light at this point of the night.

We also had a strange “table jumping” encounter at GR Brewing.  This place was also quite packed.  We found a rather large long table that could maybe seat about 10 people, but only had 7 people sitting at it.  We asked if they were using the other 3 chairs and they said no, so we sat down at the end.  We noticed some more dirty looks from people standing nearby.  A little bit later a waiter came over and said that there was a large group waiting for the table to free up and that we should leave.  Convincing him of the stupidity of leaving 3 empty seats in a place as crowded as this, we said that when the rest of the table left, we’d get up, too.  In the end, the waiting group had like 8 people.  So when the 7 left, we found another chair for them and they all had a seat.  They still grumbled and glared, which made no sense.  After being called unscrupulous by the waiter for failing to leave when the rest of the group did, we just got frustrated with it and left.

After a short stop back at The Back Forty Saloon, confirming they indeed did get busy and they also had a live band, we decided to call it a night.  One of my biggest disappointments was that the Taco Time across the street from Amway Grand Plaza Hotel was gone, and so was my late-night burrito fix after a full day of Grand Rapids Winter Beer Festival merriment.  We decided the best course of action was to replace the empty late-night burrito calories with more late-night empty beer calories so we stopped in at Flanagan’s Irish Pub that was

nearby.  Nothing too exciting going on, other than listen to the bartender cut off the very drunk guy sitting at the bar next to us.  We know he must have been in bad shape for them to cut him off, yet still serve us.  Deciding we should bow out before receiving the same treatment, went back to the hotel and crashed.  At 12:00, it was probably one of the latest nights post-Winter Beer Festival, and it seemed to be a good balance of festival sampling and touring of the excellent Grand Rapids downtown nightlife.