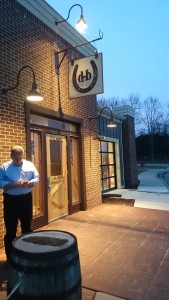 Draught Horse Brewing has a nice set-up.  In a spot on its own surrounded by some woods it has a kind of peaceful feeling even though it’s just West of a busy business center area at a major I-96 exit.  We went at night to try some beers on a Thursday night and found it to be quite busy.  They had what looked like a very interesting food menu, but they also had a great list of beers on tap.  There were many that I wanted to try so it was tough to figure out a starting place.  A wide range of styles to appeal to all beer drinkers for sure.  The beers were all very well made with great flavors.  I had some awesome IPAs and Pale Ales with some awesome fruity hops. 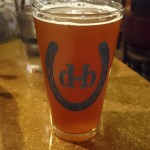 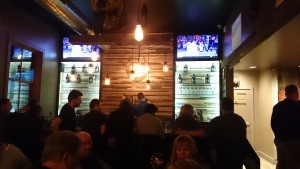 One thing that stood out was this place was very family friendly.  As a parent with 2 young boys, it’s nice finding a place that welcomes kids and doesn’t make you feel like a social pariah for wanting to have a meal at a brewery with your family.  Heck, they even have a special day of the week when kids meals are discounted.  I didn’t have the boys with me the night we visited, but there were a lot of young ones sprinkled throughout.  One thing that sealed it in my mind that this was a place that definitely had kids in mind was the boys bathroom.  Toilet & urinal as usual, but the urinal was nice and low for easy access.  It may seem trivial, but as a father of young boys, a urinal that can be reached is always a sign of family-friendliness I’ve found. 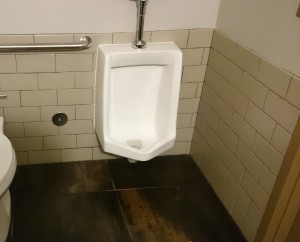