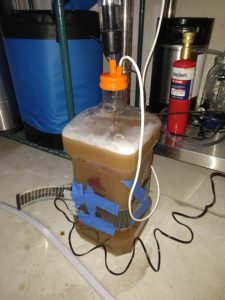 So I’ve been using these Tilt Bluetooth Hydrometers now for several batches.  They’re awesome that they give a view into your fermentation progress continually.  Every 15 minutes, it writes an update into a Google Sheet with the current SG and temperature.  Taking data so frequently, you can see the trends of fermentation as the gravity drops and progresses towards the finish.

From this data, it’s pretty easy to see when fermentation is done.  SG goes flat and is no longer dropping, even with steps up in fermentation temperature.

So I was fermenting a Plain Wheat Ale, using Wyeast 1010 American Wheat Ale.  Wyeast gives this a pretty broad fermentation temperature range of 58 – 74 F.  For this particular fermentation, I was using a fermentor that I didn’t have cooling temperature control, only heating.  So I left it to do its work at my basement temperature of 63F. 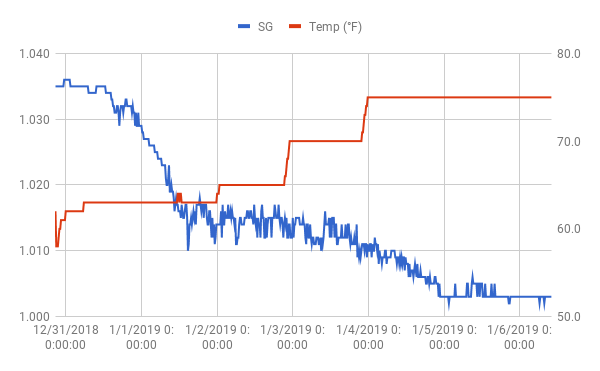 Fermentation took a little while to start off, but I soon had an overflowing krausen getting pushed out the top of the fermentor.  After a day and a half, fermentation started to slow, so I added some heat and let it climb up to 65F.  That didn’t really move the gravity any more, and I figured that maybe this one was just going to finish high on FG at 1.015 versus predicted 1.012.  I had a screwed up mash, so I figured maybe that was as close as it would get.

I then went on to my diacetyl rest where I bumped it up 5 degrees, which made it 70F.  It was hard to tell at the time, but it looked like it was maybe starting to drop a bit, so I bumped it up again to 75F.  It then started a clear steady trend of dropping gravity and dropped another 8 points of SG.

I took away two lessons from this one.  First was to pay attention to FG.  Although BeerSmith’s FG prediction is just based on standard attenuation numbers from yeast manufacturers, and yeast manufacturers provide a range of attenuation, it’s still a good goalpost to keep in mind.  In the future, if I’m still a little bit high, I’ll bump the temperature up again and then sit and wait to see if there’s still more to go.

The other lesson I learned was if I’m fermenting a yeast on the colder end of its temperature range, I need to make sure I push it through its full range of temperature to make sure it’s really done at the end. 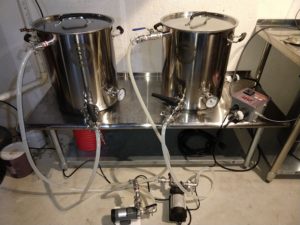 With this Wheat Ale, I was trying to get full body and mash at a 156F single rest step.  But I had trouble with my new set-up of keeping the temperature steady there (lost 6 degrees through the mash), and at some points a lot of the grain bed was drained so I could try to heat up the water in another kettle.  I also had some temperature dial issues, and I really may have been starting as low as 143F instead of 156F.  So the fact that the Tilt shows it finished up at 1.003 is indicative of my messed up mash and I probably was pretty cold.  Anyway, hopefully it still tastes good…