I had frequently wondered about my fermenting yeast starter I had gurgling away in a clear growler.  I thought, “A starter is nothing more than a jug of fermenting beer.  Since I know I don’t want to buy beer from a clear bottle because of the ability for light wavelengths to get in there and wreak havoc with the beer, I should also be concerned about my starter.”  I researched it a bit on the internet in various forums but found either inconclusive statements, or no one that really thought/cared about it.

So as I made them and let them sit

on a high shelf to be in the warm part of the room, I was always a bit worried about how bright the room was.  Finally, I had a genius idea- “Why grab the clear growler for my starter when I have a perfectly good and light-impenetrable brown glass growler sitting right next to it?”  With this eureka moment I decided this was so obvious I didn’t know why I didn’t think of it before.  So I made a yeast starter in my brown jug.

Moments afterwards, I realized the problem.  The dark brown glass was so good at keeping light out that I also couldn’t really see in.  So as I pitched the yeast and did my frequent vigorous shakes to aerate, I couldn’t see what was going on in the jug.  I couldn’t tell if I had any kind of krausen forming, or if I was totally devoid of life.  I wouldn’t know if I had a yeast factory going until the day I dumped it in my beer, so I was suddenly feeling not so bright.

Then, since I’m paranoid of extract

flavors sneaking into my beer, I always chill my yeast starter in the fridge for a few days to get the yeast to collect at the bottom and then decant off the extract beer water.  This is another time when you want to see what’s inside in your growler.  The last thing you want to do after nurturing your little crop of yeast over the last few days is to pour some of it down the drain on brew day.

So don’t do it.  Do your yeast starter in a clear or see-through container.  If you’re worried about the light getting to it (which I never really could find if this was something to be worried about or not), but it in a box or wrap it with a towel or something. 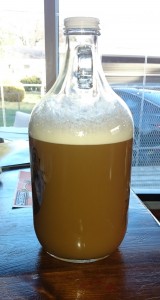