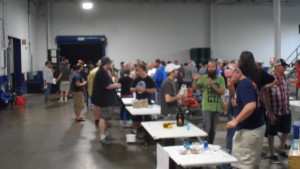 There are 2 kinds of homebrew competitions- one that has judges rate beers against the specific style guidelines, and the other where it’s a people’s choice, or popularity vote.   I entered one that was judged by a group of other homebrewers.  Standing by my table serving my Blonde Ale, I overheard a lot of comments by people holding their voting cards.  I witnessed a lot of people looking at my little sign saying “Blonde Ale” and walking on by without tasting it.  But the guy next to me with the Belgian Sour blah-blah-blah or the Dunkelweiss Dark Peanut Butter Coconut Ale, saw a lot more tasters.

Don’t get me wrong and think that I didn’t have fun talking to the brewers and figuring out how they made a great peanut taste in their beer without it being overpowering.  But I definitely noticed that the stranger the ingredients or crazier the style, the more people that were lined up to give it a try.

I would humbly suggest that my beer was very good.  Maybe one of the best I’ve brewed, surprisingly.  I was limited by the ingredients available, but I lucked out and made something really good.  But it wasn’t weird or strange.  It didn’t include any unexpected ingredients like peanut butter, black licorice, or gummy bears.  So as homebrew judgers walked along figuring out which ones they were going to taste, the plain sounding and ordinary got passed over. 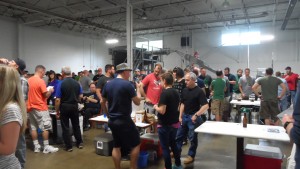 Obviously no one could tell what my beer tasted like from the name.  But they could tell it wasn’t anything wild, exotic, or unknown.  So what I took away from the experience was that if I was going to win the people’s choice, I needed to have a description that lured people in.  And to lure people in, I needed something strange and wild.  So the takeaway I had was next time I brewed a Blonde Ale, I should throw some Jalapenos or Sour Patch kids into the mix and that might get people to wander up and give it a try.  Some advice for you if you’re entering a hombrew competition.