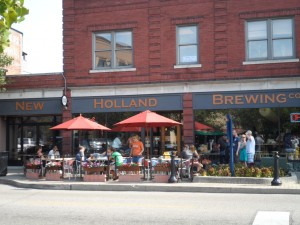 We took a trip out to “Michigan’s West Coast” this summer.  I’ve been to Grand Rapids several times, usually centering around the Winter Beer Festival.  I was familiar with New Holland’s beers, but had never visited the brewery.  We arrived at New Holland on Wednesday evening.  It was split into roughly 3 sections.  There was the very large bar area, which was geared more towards the “just liquids” crowds.  It had high tables and a massively long bar.  The other part was geared a bit more towards the “food & drinks” crowd with some booths and a few tables.  Nothing fancy or stuffy about it, just felt more like a restaurant atmosphere. 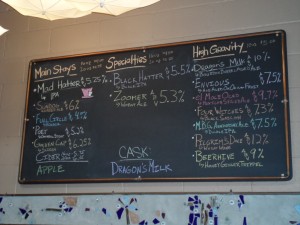 The beer menu of course was long, and written on the obligatory giant chalkboard hanging on the wall. I opted first for the Dragon’s Milk on cask.  I like Dragon’s Milk, and I love cask ales so I figured this was a no-brainer.  It was good and smooth, but the cellar temperature as opposed to refrigerator temperature I think drug it down a bit.  So it didn’t blow me away.  I then switched over to the Mad Hatter IPA.  Again, something I’ve had before and liked, but it’s always nice to try those beers you really like “at the source”.  It usually adds a magical effect of freshness and awesomeness that brings up 1 full star rating on whatever scale you rated it before.  The Mad Hatter was a slam dunk there.  It was delicious.  I of course had another, too. 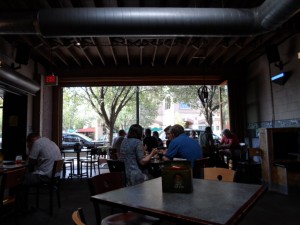 The 3rd part (if you’re still keeping track and wondering when I’m going to not leave you hanging any longer and will complete the 3-partness to this story) was a small strip of sidewalk seating at tables.  Not huge, but nice on a nice day like when we were there.  The brewery is quite a popular place.  On a Wednesday night at around 5:00 when we got there, we had no problem getting a table.  By around 6/6:30 when we were leaving people were standing & sitting around outside on the sidewalk waiting to get their number called.  The last bit of mention here is that the downtown area of Holland is really nice.  A couple blocks of very well maintained buildings filled with interesting shops and inviting restaurants.  You could probably get away with bringing the wife here and letting her stroll & shop the shops while you filled up space at New Holland.  You’d both come away happy, I’m sure.

On Friday we stopped by Founders for lunch.  My previous visits here 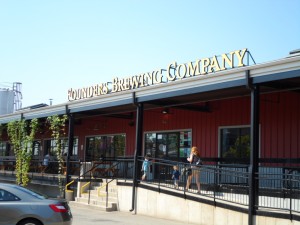 have been usually after drinking outside all day at the Winter Festival, and this is the last stop of the night before bed.  We’re usually tired and weak but manage to choke down a beer or two before the pull of the bed just becomes too much to resist.  We got there Friday afternoon about quarter to noon.  It was already pretty full.  It was a fairly hot day and all of the inside tables were occupied.  The picnic
tables out on the front patio area were mostly wide open though, and 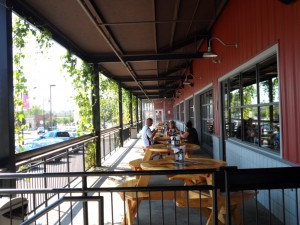 we were able to score a table there pretty easily.  With their patio on the East side of the building, although you don’t get some nice afternoon sun on a Fall or Winter day, on a hot summer day it works out great.  We were well shaded, and although it was about 90 degrees outside, the patio wasn’t too bad.  I was actually surprised I wasn’t sweating, and eventually decided it was quite comfortable.  (And that’s all within the first beer, so the alcohol wasn’t adjusting my tolerance of the temperature if that’s what you’re thinking…) 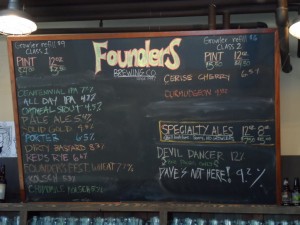 I love Centennial IPA, so I started off with that.  I was disappointed.  It was mediocre tasting, and the temperature was just a touch too warm.  It was almost like it had been poured a half hour earlier and left to sit, or maybe the barrel hadn’t cooled off yet or something.  Whatever the reason, I of course decided to change it up on the next round.  I opted for the Red’s Rye.  Another known favorite of mine from Founders, and this time it hit a homerun.  Nice and hoppy, cold & refreshing- it was just what was needed on a hot summer’s day.  That went down extremely well so it was followed by another before leaving.  The food service was a bit slow for some reason, but the sandwiches were good.  They’ve got a 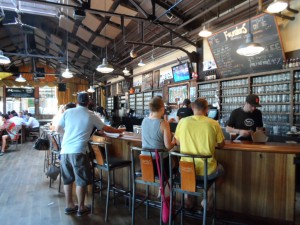 good sandwich menu with interesting combinations of things, so it’s pretty easy to find something you might like.  Of course I’d come back here again.  I know their beers are good (even if my Centennial was a bit disappointing), and the quasi-family style seating in the main restaurant area lends itself to a relaxed and social atmosphere.  So it’s always a good combination for a worthwhile stop.