Over the past few years I’ve started trick-or-treating again.  Not because I want candy, but because we had kids.  I had a couple enjoyable years pushing the stroller around the neighborhood transporting my tiny trick-or-treater from door to door sipping a beer on the cool evening night.  The little cupholders they provide on strollers not only fit water bottles and sippy cups, they also can hold your beer.  And the little basket on the bottom served for storage of overflow candy, the extra layers of coats or gloves needed depending on the temperature on that particular Halloween, and also refills/empties for the “fuel” required for the stroller’s means of propulsion.  But I was always envious of those houses I came across where the adults were sitting out and having a good time in their fold-up chairs and the fall evening air- and throwing some candy into bags every now and then.  Our house never had the foot traffic on Halloween to justify sitting outside and partying, though.  I’d be more like the strange drunk guy sitting in the dark at the end of a dead-end street that everyone would be too scared to send their kids down to.  So I had to put that idea on hold. 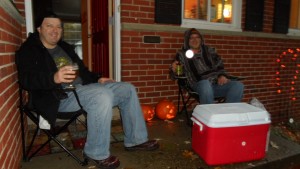 Then we moved to a new house, and with closely-spaced houses with lots of families/kids living there, I knew my time had arrived.  First step in the plan was to gracefully bow out of chaperone role for the kids and ensure the wife would cover.  Check.  Next was to line up a companion for the chair-sitting-candy-passing duty.  Got my brother-in-law, check.  Then I scraped together some random bits of the kids toys to pass as some half-hearted Halloween costumes for my fellow candy dispenser and I.  A hat, a sword, some fake hair, a toy gun, and that was all set.  I rounded up some music to add to the festive environment, and the necessary folding chairs.  Last on this list, but first in my plans was the beer.  I loaded up my cooler with all my orphaned beers in the beer fridge from 6-packs I bought of some new beer, but didn’t care for it after I drank the first one.  These things tend to sit around a very long time, so this was a great opportunity to clear out some space for future beer exploring (and future 6-pack orphans, surely). 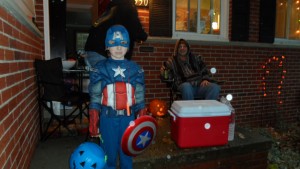 We took up our positions on the front porch with the candy bowl nearby.  It was cold, rainy, slightly windy evening, so generally pretty crummy for trick-or-treating.  We had a sporadic group of people coming by.  Most adults stayed at the sidewalk out by the street and sent their kids up to the door.  As we hailed to them, “Do you want a beer?” they all said “No” from the safety of the sidewalk.  Probably thinking the sooner they got out of this gloomy night of walking around in the cold, the better.  In the end we only had one taker.  And we were surprised at how naturally he responded to the offer of a beer.  “Do you want a beer?”  Then without a pause, “Yep.”  He then had us pick it out for him from the potluck in my cooler, open it, and hand it to him so he could continue to carry his young tot on his shoulders from door to door.  It was almost like he was expecting us to be sitting there and handing out beer.  I’m glad we had one customer, but I would have almost preferred if he was a bit more happily surprised, like “Oh wow man, what a cool idea!  I would love a beer!”  But I got rid of one more beer than I would have otherwise.  Plus, the two of us gave my beer orphans a good home.  What was interesting, is several beers that I had previously pushed aside and relegated to my orphan shelf in the beer fridge, I actually enjoyed.  I don’t know if they aged well after sitting in my fridge for over a year, if I was having a bad taste bud day the first time I tried them, or my taste had changed.  Anyway, it was fun for the two of us- and that one guy with a tiny Spider Man on his shoulders…