This sounded like a unique event- a 5k run with beer stations on the course.  This year was the second year for the event.  Held in November so as to tie in the beard theme with no-shave November charity.  With the course going through one of the on-site golf courses of Grand Traverse Resort, mid-November also ensures runners aren’t competing with golfers for green space.

I came up the night before and stayed in the resort so I wouldn’t have a 4 hour drive ahead of a 10:00 am race start time.  I made a poorly thought-out choice of doing the breakfast buffet the morning of the race.  Sometimes they’re just too good to pass up, even if you know you don’t need all that food.  It was in the mid-30’s Saturday morning so it was going to be a fresh morning run.  As I was walking around checking out the post-race party tent, I heard the greatest exchange between a couple of women who had just registered for the race-

Woman 1, “It’s a run that has beer stations ON the course.  Of course it makes sense to have alcohol this morning before we start.”

Woman 2, “This is just the greatest event ever that we found.” 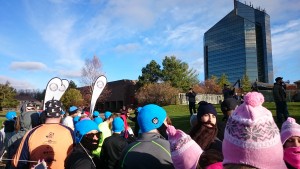 The race had about 300 – 350 people take part.  As we lined up to start, they reminded us that this was an untimed race.  Although there was a clock running, there was no chip timing keeping track of each individual runner as they crossed the start and finish time.  This of course was fitting with the crowd and the event itself.  They had people group themselves into 3 groups.  Racers lined up in the front, Runners in the middle, and Beer Conniseur’s at the end.  The group of racers only numbered about 20, so after we saw them off, the main group of us headed out next. 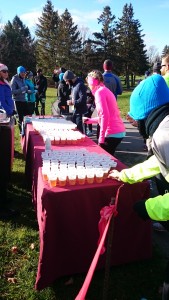 that wove around, up, and down through the hills of the golf course providing nice scenery.  Just before the first mile marker we had our first beer station.  As we got there, the table was covered with scores of small plastic tasting cups filled with the first beer, about 3 oz. size.  People lined up orderly, got their beer and then stood around a bit while drinking their sampler.  Once done people started up again down the path towards station #2.

The first beer was a saison of some sort by Beard’s Brewery, and I wasn’t a big fan.  As I continued on to station #2/mile #2, I was starting to regret the breakfast buffet and the sausage gravy biscuits.  It sloshed around in my stomach with that slightly sweet/sour saison beer making me wonder what I was thinking.  Station #2 was a good pale ale from Right Brain Brewery.  Right up my alley for beer style, I was starting to change my opinion of whether or not beer & running was OK to mix like this. 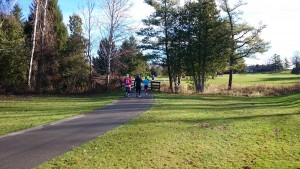 Approaching the 3rd/last beer station there was a giant hill.  Pushing myself up the hill and telling myself I couldn’t walk, I got to the top feeling quite exerted but happy to be at the Short’s beer stop.  My high hopes were crushed as I saw they had a pumpkin spice beer.  I understand that was probably in season, but I’m not a pumpkin or spiced beer fan- especially at the 3 mile mark.  But since I signed up to drink beer while running, I of course had to finish it.  I noticed most of the conversation around me was how most people didn’t like the beer.  But I didn’t notice a single person pour it out or toss a half-full cup in the garbage.  Apparently everyone else was of the same mindset that this was part of what they paid for.

At the end of the race, they had a DJ going underneath an open-air tent/canopy top.  You could get cookies, granola bars, bananas, bagels, water.  Once adequately recovered, you could go over to the 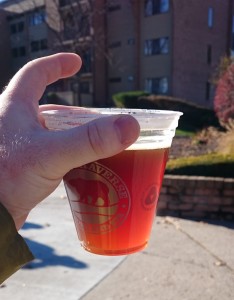 beer table and collect your 16 oz. pour of one of about 10 different beers from either Short’s, Beards, or Right Brain.  I had an awesome pale ale by Beards, made with Galaxy hops.  It was fresh, slightly fruity, and nice and cold.  I thoroughly enjoyed it while sitting and soaking up some sun.

The question is- would I do it again?  Yes.  It was cool running on the golf course, and even though it was well into fall and the trees were all leaf-less, it was still nice outside.  It was also fun running outside in the cold weather.  I would probably follow the tip from some fellow runners we saw that instead of the small medicine cup-sized beer sample, somehow managed to have a full 12 oz. glass.  The trick they said was to first get a glass of water (bigger cup), drink that down, and then fill it up with 3 sample cups.  That would’ve been good for beer#2, but the small size was just fine for beer#1 and #3.