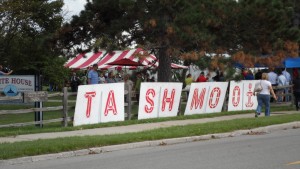 Tashmoo biergarten is a local Detroit entity.  They’ve been around a couple of years and have a unique offering to Detroit area beer lovers.  They do an outdoor beer garden exclusively in the fall.  It’s always outdoors, and they limit themselves to the fall time of year.  As they’re getting more popular word of mouth, I frequently hear people talking about or asking if/when they’re going to expand their season.  Last year, I heard they were contemplating starting in summer, but that didn’t happen this summer.  Although I suppose mid-summer is probably technically summer rather than fall.  Anyway, the other unique aspect is they don’t have a permanent location.  Most of their events have been held on empty lots in East English Village neighborhood of Detroit.  They bring in picnic tables, board games, some bean bag games, a bar (of course), and then some local food vendors.  They stress being local in all aspects- the location, the beer offerings (all Michigan brewers), food (local restaurants or food trucks), and people.

They draw in the crowds by way of “virtual word of mouth”.  Of course, way of mouth these days includes actual word of mouth, Twitter, Facebook, news articles, blogs.  So I knew I wanted to go to one of these events, but due to their varied location and non-standard schedule, I had to just wait and hope I’d catch word of the next event.  Twitter came in handy.  They announced their date a couple weeks in advance, then the location about a week or in advance.  This one was going to be on Belle Isle, which was a new location for the Tashmoo event (I think).  It was on the lawn of a historic house there, aptly called The White House.  Guess what color it was?

I hadn’t been out on Belle Isle for several years.  It was a nice Saturday afternoon, with a mix of clouds & sun overhead, and a nice warm fall temperature.  But being post-summer it seemed, the island was largely empty.  Great big wide roads, huge grassy expanses for picnicking or playing football, BBQ’ing, etc.  There were pockets of people here and there, but by and large it seemed under-utilized.  Things were clean and grass was well-maintained, but people just simply weren’t there.  Of course, I was just concerned about who was at the White House, so I just drove by and observed the emptiness.  The event was from 12 – 6 pm, and we got there around 2:00.  You buy tickets at a table up front which you use for drinks.  We bought drink tickets and got in the large line.

We had plenty of time to check the place out because the line was extremely slow.  They had the tables set out and people were playing chess, checkers, Candyland, dominos, etc.  There was a cooking station where People Pierogi’s was serving up 3 different stuffed pierogis.  The small bar was set up with the kegs hooked up to Igloo cooler boxes serving the beers on tap.  They had 3 or 4 on tap at a time, and had 6 or 8 varieties they planned to rotate through the day.  It was nice to hang out in the yard, with the historic 2-story White House as a backdrop.  Being fall, the bees don’t know what to do with themselves, so they were around looking to scope out the trash cans, and any beer. 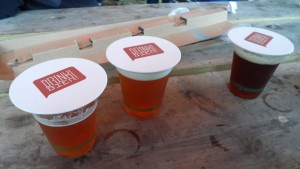 Now back to the line.  It started out fine, standing and talking, and enjoying the nice fall day.  We mosied along a bit chatting and taking in the scene.  After a while, it started to dawn on us how slowly we were actually covering ground.  I tried to push the impatience out of my mind, but it was coming on strong.  Soon, the people around us started to talk about how long they’d been waiting, how long someone else had been waiting, how long the line was, etc.  Several minutes and a few inches farther along, the discussions changed- 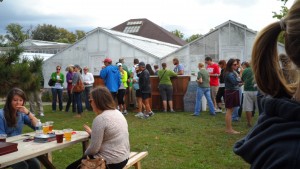 somewhat.  Instead of the people in front of us talking about how slow the line was moving, we had people coming up to their friends and saying how they needed another beer, but no one wanted to stand in line again for 30 minutes, so they were heading somewhere else in town to drink beer.  By the time we made it to the bar, I ordered my full allotment of 3 beers I had planned to spread throughout the afternoon and we carried them to the table.  We’d spent 30-35 minutes, and the line wasn’t getting any shorter.  It was actually getting longer.  Although people were leaving that had their first round there because they couldn’t take the line for a second time, there was also a steady stream of new people coming in, so the line never shrank.  It just kept filling up with new people.

Our sit at the picnic tables was nice.  The beer was good and fresh tasting, and it was fun trying to figure out dominos.  This game is much more complicated than it would appear.  I thought it was just something where you laid them out on the table and matched up numbers.  We tried that and it was really lame and really short.  So I decided to look at the rules.  There were about 6 different sets of game rules, all of them involving several paragraphs of rules.  I decided that was ridiculous, and the dominos just needed to go back in the box.  It was a decent distraction for 3 beers.  We were done, we’d eaten pierogis (delicious), and were not interested in standing in the even longer line now.  Luckily, I’d heard that Detroit Beer Company was having an anniversary party and all beers were $2.  So we were off…