We caught the bus from Copper Canyon Brewery in Southfield around 9:00 AM.  Once we all signed the waiver saying we were taking responsibility for ourselves, the 2 Cornelius kegs were tapped (Irish Stout and an IPA- both from Copper Canyon).  By 9:30 for sure, we were into our first beer.  The bus trip out to Bell’s took about 2 – 3 hours from when we left.  Getting lost at the pickup spot for the Ann Arbor group didn’t help any, of course.  By the time we got our beers at Bell’s and sat down, we were all feeling pretty buzzed.  I suppose that’s the hazard of giving us free self-service access to 2 kegs of beer and a long bus ride with nothing to do but sit around and talk.  In hindsight, a little slower start to the drinking would have left clearer memories of the breweries/beers later, but that’s why they say it’s 20/20. 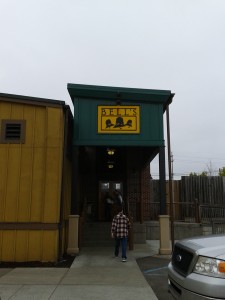 Bell’s Eccentric Café was quite cool.  Interesting old brick place, high ceilings, stained glass windows, and a ton of Bell’s stuff on tap.  All the

usual favorites, plus they had 3 or so “Experimentals” that didn’t have a name yet, just a description, and Hopslam on cask.  The food was good, and I noticed the place seemed quite full of people/families there for lunch (which I would do to my family too if I lived there).  The Two-Hearted IPA was absolutely amazing.  I had a hard choice between something that I’d already had and knew I liked-
knowing that fresh from the source would be even better, or one of 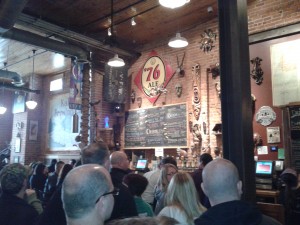 the Experimentals that could only be bought there.  I’m glad I went with the Two-Hearted and was blown away, rather than try something new and potentially being disappointed.

Arcadia was quite spacious, seemed to be in an old main street department store.  The beer was all good, nothing that totally blew me away.

Dark Horse was a cool place.  It seemed like they had expanded at some point, as the building inside looked like it was 2 different vintages.  But it had a very cool and earthy feel inside, with a low ceiling that was covered completely with mugs hanging up.  I don’t know if these were mug club mugs or just decoration, but it made it very cool looking nonetheless.  They had an outdoor area as well that we enjoyed sitting outside and soaking up some sun rays.  They had a small outdoor stage there where someone told us they have bands every now & then.  I know I love Dark Horse beers, but by this point, several beers in at the breweries with the gaps in between filled with bus beer, my taste buds were getting a bit, “Yeah, whatever.”  So I’m pretty sure it was good, but doesn’t distinctly stand out.  They did have a large gift shop with tons of shirts, sweatshirts, hats, etc.  They all looked pretty good, but were a little pricey for my souvenir taste.

The last stop was Sleep Bear Winery & Microbrewery.  This was just off of I-94, in what must have been an old restaurant of gas station type place.  Pretty unattractive from the outside, and in the middle of nowhere right next to the interstate.  Inside was bright & lively.  Of course our busload of 40 drunks surely livened the place up, but I was surprised at how many random folks kept coming in and having a couple of drinks.  There was a free pizza buffet here, that helped cap off the day’s beer.  At this point, my thinking brain got the better of my drinking brain, and I switched to 100% water.  So I can’t tell you if the beer was any good.  Not that I would have been much use as a taste-tester at this point anyway.  I do recall some of the pizza being quite gross though, and that’s what I blame on the stomach virus that got me the next day and stayed with me a week.  I decided none of my friends got it because they were drinking beer, while I was just drinking water.  If I had been drinking beer, the alcohol would have killed the food poisoning germs hiding out on it, and I would have been fine.  Or maybe it was the water itself, perhaps run-off from a nearby farm and filled with chicken poop or something.

After some good napping on the bus back, I was feeling refreshed enough to try to help the cause of polishing off the bus beer.  The IPA was gone, but there was Stout left.  However, I decided that Stout that had sat at room temperature all day long on the bus wasn’t so good 12 hours later.  We got back to Copper Canyon about 9:00PM that night.  All in all, quite a good time, and well worth the $60 ticket price.  Of course we paid for all of our drinks at each place, but these were all top-notch breweries (except the unknown Sleeping Bear- which still remains unknown to me, other than a life lesson of not eating pizza from a buffet when your sense of good & bad is somewhat blurred by a day full of alcohol).