Almost like a kid on Christmas morning, I sprang out of bed and hurried about my preparations to get out the door Saturday morning on February 27th.  Of course everything was packed the night before, and my clothes were laid out.  It was the 11th annual Michigan Brewer’s Guild Winter Beer Festival, and I’d been to 9 or 10 of them.  Each one I look forward to for at least half of the year.  It’s probably the one thing that makes winter bearable when it starts in Nov/Dec is that I know at the end of February I’ll be making the roadtrip out to Grand Rapids for another Winter Beer Fest.

I attempted to check-in to the hotel at about 9:50am to which they simply replied that they don’t guarantee rooms until 3:00pm, so I could come back later and check.  A quick brunch at Burger King to fill the stomach, then Kevin and I boarded the shuttle bus from the Holiday Inn and made the trek up to the baseball field north of town.  As Brewer’s Guild Enthusiast members (annual paid membership), not only do we get access to buy our festival tickets a couple of days early and avoid the mad rush, but we get into the festival an hour early.  We got there about 11:30 and there were already 2 lines 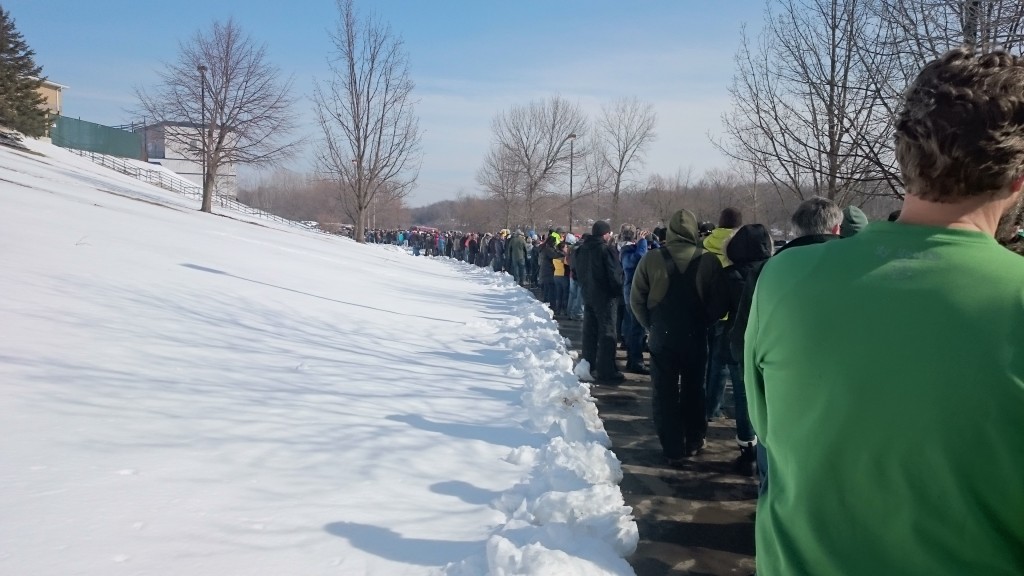 formed.  One for the enthusiasts (gates open at 12:00), and one for the general admission (gates at 1:00 pm).  As we kept walking and walking we were blown away at how long the line was for the enthusiasts.  There were probably 500 – 600 people in front of us, out of the total 6,500 people that would be attending that day.  Luckily they did a good job of pre-checking IDs, so once Noon came along, the line zipped right along.

Being in the hour early is nice.  The lines are really short and it doesn’t feel as chaotic as you figure out where to go.  For the first hour, we prioritized the places we wanted to go that we knew would be really popular once the general admission gates opened at 1:00 so we could get those out of the way.  And as the clock struck 1:00, you could see and feel the hum of the crowd as people started pouring in, scrambling to get to their favorites.

The weather was quite nice and we felt a bit spoiled.  Some of these in past years have been quite cold, which carries its own charm from a “toughing it out” perspective, but this year was sunny with temperatures in the mid-40s.  This of course was great because fumbling around for tokens, trying to hold your sample cup, trying to keep track of which beers you tried and which ones you liked, all while holding gloves is a real pain.  With the weather not requiring gloves, it made it all manageable.

Another excellent tool was the App BeerFestList, which partnered up with the Brewer’s Guild to have the complete brewery listing and each beer the brewery had on hand.  So not only could you scroll through the listings to see what you wanted to try, but you could give it a 1-5 star rating to help your fuzzy memory the next day as to which ones really were your favorites (my ratings below).

And this year, I finally remembered  to bring my leftover tokens from festivals past, so I felt no pressure to drop a token in every box and not be paranoid of running out.

We took a cab back as we had big plans for a night on the town afterwards and we wanted to get to the infamous HopCat before it was too full.  Many memories of the mac ‘n cheese with chorizo and jalapenos has a strong pull…  Of course we got there and it was a 30 minute wait.  After walking around and striking out at other joints that had an equally long wait, we settled in for pizza and beers.  But the effects of what seemed to be an unusually high number of high-ABV beer samples were wearing on us and after a meager attempt to enjoy Founders, we packed it in and headed back to the room for an early bedtime. 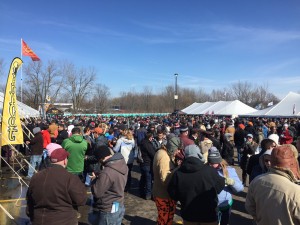 Overall, the beer quality was really good this year, and there were a lot of beers Kevin & I were both quite impressed by.  The beers from Cedar Springs were amazing, and we actually went back 3 times for refills of their Marzen.  Another amazing one, that for me just barely edged out the Marzen was Beards Brewery PomeGalactic, an amazing pale ale brewed with sweet Galactic hops.  Rounding out my top list of stand-out beers was Wolverine State Brewing High n’ Dry Rye.