I was able to get some free tickets to the Royal Oak Winter Beerfest at the Royal Oak Theater (cheers to Charles Psenka from Northern United Brewers).  I hadn’t been to the Theater in many years, since back in the late 90’s when it was 4th Street Asylum.  Those were some good times back then, with booming dance music, and guzzling ½ price Long Island Ice Teas…  But this was different, it was a craft beer festival.  Sporting a combination of Michigan brewers and national craft brewers, it was a promising line-up. 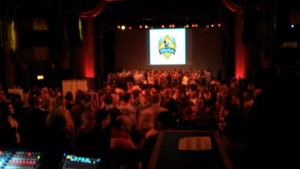 The beer festival I’m used to are the Michigan Brewer’s Guild festivals, and was what I was roughly expecting except for the mix of non-MI breweries, and it being indoors.  But it was quite different.  The attending crowd was different from the Guild festivals.  This was a crowd that largely seemed to be there for a night out on the town first, and the beer second.  True, it was an all-craft beer festival, so people obviously came for the beer.  But a lot of the people were dressed up for the nightclub scene.  I was shocked when I saw the first pair of skin-tight jeans and stiletto heels on a group of 3 girls.  I wondered at the choice of shoes at an event geared toward drinking & sampling a lot of beer.  As I continued to see this choice of pant-wear and teetering shoes, the novelty wore off and I wasn’t as shocked any more.

The vibe of the event was also different.  It brought back memories of 4th Street Asylum with groups of girls chasing after guys, and groups of guys chasing after girls.  The key differences were the lights were on, no booming techno beats, and everyone had a craft beer in hand.  It was an interesting mix, and something I didn’t think I’d see at a craft beer festival.  Maybe it indicates that craft beer is starting to become more accepted by larger masses and not just the fringe beer snobs.  Don’t get me wrong, you still could do the usual beer festival aspects of mapping out which beers you wanted to hit, hang out telling stories, and meeting other beer lovers.  Not everyone was “clubbing it”. 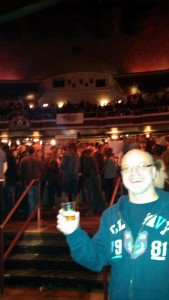 Unlike the Brewer’s Guild festivals, they didn’t have a token system.  Instead your beer list served as your beer bank with a number of printed circles corresponding to the number of tastings you had.  As you tried a sample, they’d either mark off a circle with an ‘x’, or use a hole punch.  They were much more adamant about punching/x-ing your circles off than the token gatherers at Brewers Guild festivals, but we didn’t run out of circles.  Plus as people left, they’d offer up their partially marked-off lists to add to our collection.

One big downer was the fact that most of the beer was not on draft.  We’d hit a brewery we wanted, and found a giant bucket of ice with bottles or cans sitting in them.  They would then open one and pour a sample into your cup.  I felt like I could be doing that at home.  Instead of thinking I got something special from Oskar Blues, they just grabbed a can like I had in my beer fridge at home and poured it into my cup.  One advantage I guess was that unlike at home, I could drink 2-3 oz. out of 10 different beers in a night (without wasting beer of course).

All in all, it was a good night.  The tickets were free, so I definitely can’t complain.  But I think with all the bottled/canned beer, and the semi-club atmosphere, I don’t think I’d go again.  Of course unless someone gave me free tickets…