This was the 7th annual winter festival for the MI Brewers Guild, and fortunately I’ve been to 6 of them now.  Unfortunately, I don’t have a perfect attendance record.  This year, the festival must have gained in popularity for some reason because everything sold out early.  Usually, I book the hotel over Christmastime, then take my time in January to buy tickets online and finalize plans.  This year, I was surprised to find tickets online sold out in early January, and most of the places around town to buy them were also sold out.  I bought the last 3 tickets in the state when I bought combo Festival/Bus tickets from Motor City Brew Tours.  They sold out their first 1,500 (out of 6,000) in a few hours online.  I noticed that as a result, for the first time they’ve started posting the date when tickets go on-sale for future festivals.  Summer festival is in July, but they’ve clearly communicated tickets go on sale on May 1st.  I’m going to be ready!

I didn’t want the bus ride, because we always stay over in Grand Rapids and enjoy a few craft beer hot spots Saturday night, but it was my only way to tickets.  So we paid the $80 for bus + festival, then told them we weren’t taking the bus and asked them to just mail me the tickets ($40 price for tickets alone).  The usual Holiday Inn hotel downtown was sold out of all but the most expensive rooms, but we were able to find a room at a good price at the Amway Grand Plaza hotel.  The downtown area has many great restaurants and bars/pubs all within easy walking distance.  And the town is very clean, with a lot of attractive older buildings that have been kept well maintained.

We got to town Saturday morning, grabbed some lunch, and headed to Hopcat bar.  We missed the bus (left ½ hour earlier than they told me it would when I reserved 3 spots), but met a couple of other festival-goers that were taking a minivan cab out there, so we joined in.  The line was huge.  We probably got there about 12:30 (1/2 hour before they opened the gates), and based on the fact they sold 6,000 tickets, I’d guess there was

probably 5,000 – 5,500 people standing in line in front of us.  We figured it would take an hour to get through all of us.  Amazingly it took 15 minutes because they were very organized in checking IDs ahead of time, etc. 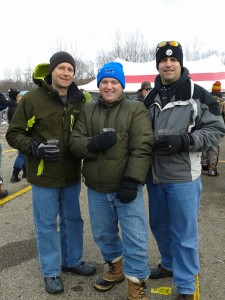 Festival was fun of course, but freezing cold.  We dressed prepared for it, but every time I had to take a glove off to mark down some tasting notes, I swore I was getting frostbite.  The more popular places, as usual, had huge lines.  So it was a combination of alternating between a lesser-known place to get quickly served, followed by standing in the long line and drinking down the beer.  This worked well for getting a mix of the old favorites, and a few new ones at the same time.  My taste ratings are below.  After the festival, caught a taxi back downtown and spent some time at Founders brewery.  Of course great beer, and it was packed.  Couldn’t get back into Hopcat (without paying a $15 or $20 cover charge!!), so we stopped off at some other non-descript place on the way from

Founders to Amway Grand.  Of course the final topping on the evening was a burrito take-out from Taco Boy, across the street from Amway.