We really enjoyed last year’s Harvest Moon Festival in downtown Farmington, so I had my eye out for the advertisements.  It was the same pattern as last year, with a beer & wine tasting on Thursday 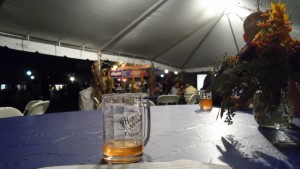 night, a dance Friday night, and then a kids family fun event Saturday afternoon.  We decided to go with the Thursday night tasting event.  It ran from 6 – 11 pm.  We got there around 8:00, and there were a lot of people there.  It wasn’t crowded or anything, but definitely a lot of people.  This year they had expanded to take over the full Riley park square in downtown.  Last year, they had the pavilion and the area south of it.  This year, they took over the grassy area north of it as well. 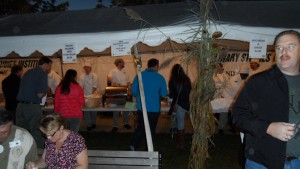 They had the same arrangement of beers under a tent on tap with maybe 2 or 3 beers from a brewery all mixed in along several tables, with volunteers doing the pouring.  The area next to the tents had a number of tall tables for standing/leaning, while resting your drink on something.  Wine was under the pavilion.  Schoolcraft College had their Culinary School students putting on the food.  This had doubled in size and they had several different entrée options, plus some desserts and sides.  We shared both the pulled pork on a pretzel roll, and the chicken soft tacos.  They were awesome.  On the grassy side of the pavilion, they had some tables and chairs set up- both under the open sky and under a large tent.  They also had 3 small campfires set up with hay bales & chairs surrounding them, and a guy singing and playing acoustic guitar through the sound system.  He was very good.

Same as last year, the evening was perfect weather for being outdoors.  That early fall, where the nights are just starting to turn chilly, but not downright cold.  There’s a freshness in the air you can feel and smell, and it makes it nice sitting outside.  The campfires were new this year, and they were very cool.  They were small portable fire pit things and they had a big common pile of firewood.  Each fire pit had its own bucket of water, I guess in case the fire spread to the hay bales or something.  I was amazed when someone announced they thought the fire needed another log and then walked off over the pile on the side of the park, grabbed a log, and brought it back and put it on the fire.

I was amazed that the wood was freely acceptable, and that there wasn’t like some kind of official “fire tender” person who’s job it was to put wood on the fire.  I’ve been too long exposed to the “nanny state” of things, where to protect everyone from even the remotest possibility of doing something that might injure yourself, you’re prevented from doing it in public.  Of course to protect themselves from all of the maniacs out there that sue someone because they can, and they can get a ton of money for it in the process.  I can be as crazy, stupid, and reckless as I want to be in my back yard, but once I go in public, I guess I’m just used to turning off my brain and not having to think about making decisions about something that might hurt me.  Anyway, realizing we were being treated freely like responsible adults, it was great.  Almost thrilling even.  We picked firewood ourselves, decided when to put it on, when to adjust it, etc.  It was almost the highlight of the evening.

But since I didn’t go there to make a campfire, I suppose I should talk about the beer.  They had about 65 different beers, ciders, and meads 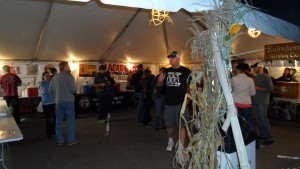 on tap.  Maybe 1/3 of them were Michigan beers, 1/3 were craft beers from out of state, and the last 1/3 was some from the bigger brewers- domestic and international.  It was a fun mix.  We enjoyed reading the “craft-beer-like” descriptions of Molson Canadian and Pilsner Urquell.  We got to try a Sam Adams specialty brew that we heard is only available on draft.  Unfortunately(?) it was delicious.  This of course is unfortunate because that means I can’t go buy it at the store in a 6-pack and enjoy it at home.  But I did enjoy it at the festival.  I also got to talk to the local Michigan sales rep of Epic Brewing (based in Utah), so I heard a bit of the back story to their new beer they brew in Colorado.  Apparently Utah beer laws don’t allow brewers to have a taproom with their own beer in Utah.  So they built a taproom in Denver, CO so they can serve their beer on draft to their followers.  Interesting.  They gave you a little 3 oz. plastic taster mug that you could fill for 1 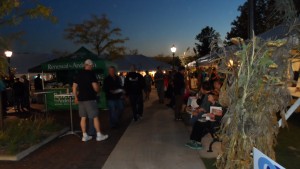 ticket ($1).  Or if you paid 5 tickets ($5) you could get a 12 oz. clear plastic cup filled with your favorite.  That option obviously isn’t the budget-wise option, but as fun as it is, you do eventually get tired of drinking your beer out of oversized thimbles.  However, I stuck to the ticket-at-a-time game with my miniature beer mug.  That way I got to try more beers.  Below is what I tried, and my ratings for each: