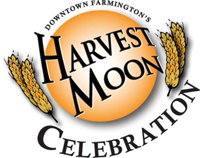 Downtown Farmington has had this festival a few years.  We went in its inaugural year, and it seemed like a good idea that just hadn’t reached its right audience yet, as it was sparsely attended.  This year was about the 3rd year or so, and it definitely had found its crowd.  We went on Thursday night for the “beer tasting”.  They tried to polish it up and make it sound sophisticated by saying there would be people on-hand to talk about pairing your beer with food, and you could “talk to the brewers”.  In actuality, it was just a nice drinking festival.  It cost $10 to get in with 10 drink coupons and little 3 oz. plastic beer sample mug.  Being in the early fall, you’re just starting to get those cool evenings where it’s nice and refreshing to sit outside, but you definitely need your jacket and long pants.  They take over the town square with tents set up with tables for the beers to be dispensed, and a bunch of tables set up under the open sky.  It’s all very close quarters so it’s a short walk over to fill up your beer sample glass then have a seat at one of the tables under the fresh night air while listening to some music.  They had a guy with an acoustic guitar that was also singing.  Made for nice background.  They also had a big selection of wines there also available for samples, in case you traveled there with some non-beer fans.  Finally rounding it out they had food there being prepared by some local college culinary arts students.  It all looked pretty good, and the nachos hit the spot later in the night.  I’d definitely do it again next year, now that it’s drawing a decent-sized crowd, has a large & good beer selection, and makes for a nice evening out.  The only downside is that it’s on a Thursday, so there’s always work to contend with the next day.

There were 52 different beers on tap, and they spanned the spectrum.  There was a good collection of some Michigan breweries, a few mass market entries, a few larger “semi craft breweries” (aka Sam Adams), and some good national craft brews from outside Michigan.  The beers, in order of my ratings: