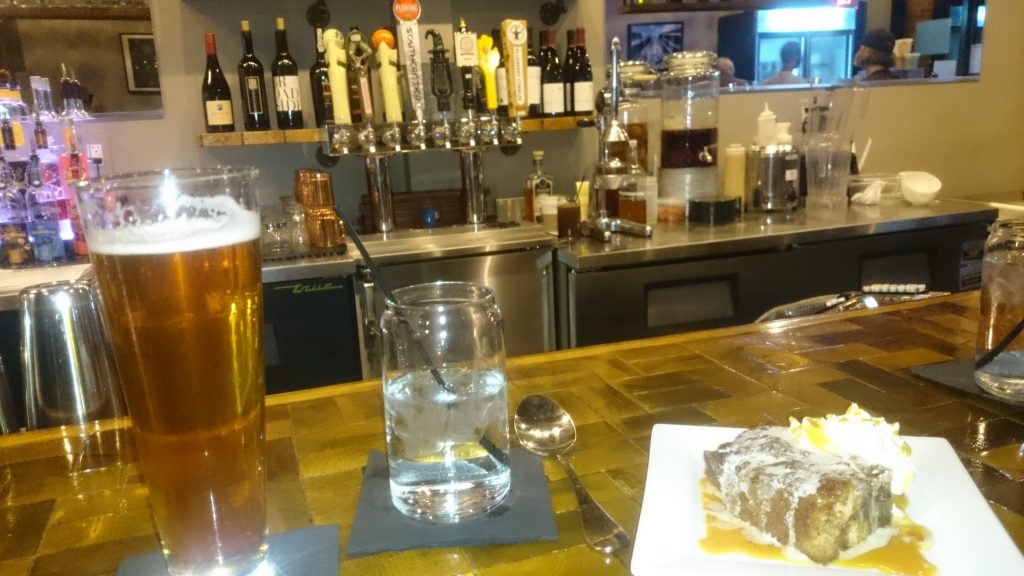 Finally we heard they were going to be serving craft cocktails, and craft beer.  Woo-hoo!  The background story was that Brown Dog Creamery in Northville was looking to expand operations and add another location to expand their ice cream production.  They found out about the Farmington site and thought it would be a good location.  Then they heard a liquor license was available and that got them thinking of something new and unique.

We had stopped by a couple times during the afternoon for the ice cream and it was awesome.  On a recent Friday night we decided to check out the “bar” side of things.  There were a lot of folks in there around 10:00 PM as we took a seat at the bar.  The menu had an impressive/tempting array of hot appetizers, but we’d already eaten so we skipped that.  Then, in addition to their array of fresh-made ice creams, they had several delicious-sounding desserts.  We chose one made of cider mill donuts, caramel, and fresh whipped cream.

They didn’t have a massive draft list, but the 8 they had were all good craft- most of them Michigan.  There was a lively feel in the place, and they had good music playing, almost felt like we were in a nightclub- but not in an annoying way.  It was a very refreshing and different place to hang out in the evening.  We’ll be back.