There’s several good beer bars around town lately, where you can find good craft beers on tap and interesting atmosphere.  Downtown Detroit excels as a good concentrated grouping of them making for easy walking distance in between.  Although I have some friends or work colleagues that would be scared stiff of even the concept of driving into Detroit due to misinformed illusions of what they hear from news headlines, I am a bit of the opposite.  Having lived downtown for a few years, I am a big fan of the city and the efforts to bring it back to vitality.  And just being down there, you can feel that spirit and enthusiasm by the city’s residents and business owners.  Combine this with the same “fighting spirit” of the craft beer wave sweeping through, and it makes for some good times.

Being that there was an Oktoberfest event going on this Saturday, we had to cut short our downtown bar tour and just hit a couple high points.  We started off the afternoon at Rub BBQ & Pub, which is on the North side of Grand Circus Park, just West of Woodward Avenue.  Rub’s been open a couple of years and they’ve got good BBQ (as you would assume by the name).  I can’t tell you their particular specialty of BBQ, but I can tell you it’s good, and they’ve got great homemade sauces.  There’s a large long bar on one side with some tables, and a collection of tables & booths on the other.  The bar has the typical collection of large-screen TVs playing various sport stuff.  Their beer selection is quite admirable.  Maybe about half of it is Michigan craft beer, the other half a wide-spanning distribution from mass-produced commercial stuff (this close to Tiger Stadium and Ford Field they must try to cater to the pre & post game crowds), to a few unique ones spread in between.  Altogether, I’d estimate about 20 different beers on tap.

After some good food and a couple tasty beers, we walked around the corner to the Park Bar.  I think there’s some interesting back story to this bar, but I can’t exactly remember it.  I know the owner remodeled/restored the bar a few years ago, and has/had big plans for further restoration and work on the building.  I can’t recall if any of that succeeded or where he’s at, but I don’t really care because the bar is a great place to go, regardless of anything else he may have going on.  There’s a huge circular bar in the middle of the room, with tables at the outside edges.

Two of the 4 walls are windows top to bottom with high 14 ft ceilings (or is it 20?  don’t hold me to it, I’m not a carpenter), so there’s plenty of interesting light coming in.  Now there’s not that much interesting to look at out the window between the 2 deserted buildings and the empty lot, but being just a block off of Woodward, and near a couple hot spots, you still see a fair amount of foot traffic to gawk at.  And of course you can always pass the time speculating about what’s going on with the deserted buildings across the road- whether they’re in the process of being restored, prepped for demolition, or just gathering dust.  They have a very good beer selection here.  A good amount of Michigan craft beer on tap, with some of it fairly rare (we had Kuhnhenn’s on tap, which was awesome), and a mix of some other notable craft beers from around the country.  There was a small take-out restaurant directly attached (maybe owned by same guy?) called the Budapest Grill.  That seemed to do a fairly healthy business and most of the people would get the food next door and walk it across and sit at the tables around the bar.

Last on our walking beer tour was a trip down to my favorite downtown spot, the Grand Trunk Pub.  Now this used to be called Foran’s Irish, then Foran’s Irish Grand Trunk (I think), and then Foran’s Grand Trunk.  Now they finally settled in on Grand Trunk Pub.  The last name is the one that seems to make the most sense with its original roots, as a ticket office of the Grand Trunk railroad.  This place is really cool.  It was bought out a few years back and the new owners wanted to take it in a different direction.  I’d never been into it under the former owners, it always looked like it would be a scary dive bar.  It’s a narrow place right on Woodward Avenue halfway between Campus Martius and Jefferson Avenue.  You walk inside and you find these huge 14 ft cathedral ceilings with interesting architectural coves, exposed brick walls, and old aged wood carved bench and paneling.  There’s a large bar that runs the length of this long, narrow place.  They bought the restaurant next door a couple years back and knocked down a section of the wall in between for easy passing back & forth.  They serve food of a fairly basic but good quality.  The highlight is- can you guess?- their beer selection.

They have about 14 different brews on tap, and everything is Michigan made.  They always have the good stuff from the powerhouse Michigan breweries (Bell’s, Founders, Arcadia), but also a few others thrown in for fun.  There’s also a good crowd in here of a wide-ranging mix- young, old, artsy, professional.

After a few good beers there, we were into the cab over to Atwater Brewery.  Atwater is a bit off by itself.  There have been a few other places near there that have come & gone over time, and I think right now they’re pretty much gone.  Atwater has gone through some changes over the years.  They were Atwater Block Brewery for a
while, then they added a restaurant onto the brewery.  It initially did well, then was almost always vacant.  Then they were Stoney Creek Brewery for a bit, then that closed.  Now it reopened under the Atwater name, but they dropped the “Block”.  They also scrapped the dining room thing and went for a more industrial beer tasting atmosphere.  They’ve got an aisleway down the middle of their brewing area, and you sit in between these giant stainless steel brewing vessels on the bare concrete floor like someone snuck you in the back door to hang out in the brewery because you’ve got “connections”.  It’s a very different atmosphere from a typical brew pub, or any of the good beer bars we visited that day.  But with a lot of competition on the craft beer scene lately, trying something different isn’t a bad thing.  They were having an Oktoberfest here, but it wasn’t overly populated.  It was rainy outside so not the best weather for sitting outside and enjoying a fresh fall day.  It still made for a fun “family picnic”-like atmosphere. 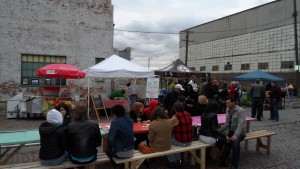 That’s meant as a compliment by the way, as in a gathering of a bunch of people having carefree fun on a Saturday laughing, hanging out and playing games.  Not to be confused with the family picnic you hated going to as a kid and despised your parents for making you hang out with your weird cousins who you only saw once a year for a few hours of forced uncomfortable socializing.  I’ll have to reserve full opinion on the brewing floor brew pub layout as there was a special event going on, and it was the last stop on a very liquid pathway that day.