I was trying out an electric all-in-one brewing system, and appreciating the fact that I could brew indoors, meaning I could brew in the evening.  Not having to fumble around in the driveway in the dark with a flashlight was part of the appeal of going electric.  So my brew day went a bit longer than planned and there I was about 11:30 at night, finished with my brew day, and trying to clean up.

I didn’t want to go outside in the dark and scoop my spent grain into a bag, so I started thinking.  Since I’ve rinsed remnants of spent grain out of my mash tun out in the kitchen sink and ground them up, and the fact that grains are all-natural, I thought, “Why not?”

So I proceeded to scoop out the aftermath of 11 lbs. of spent grain into the sink.  I was a bit alarmed at how much that pile of grain filled up the sink, but I was tired and eager to finish up the brew day.  I turned on the faucet and started running water and scooping grain into the disposal while it was running.  I figured as long as I washed it with a lot of water, and took it slow, I’d be fine.

I soon found that I wasn’t fine 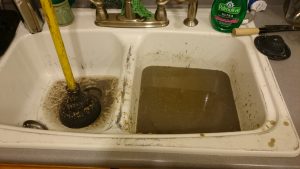 and the drain wasn’t clearing.  I brought out the plunger, but it didn’t help.  In the end I had to do what I was trying to avoid in the first place and scooped the grains out into a bag.  But I also had a clogged sink as a bonus.  I had hoped that after sitting overnight it might somehow magically clear but it didn’t.  The next day I had to take the pipes off under the sink to clear them out and snake them a couple times before finally getting it to clear.  Lesson well learned as to the limitations of the kitchen sink garbage disposal.