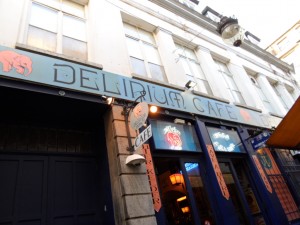 Before my flight back to Michigan, I spent the night in Brussels.  I looked up my hotel in Google Maps, then had the Google supercomputer show me anything beer related nearby.  It showed me this place called Delirium Café.  A brief internet search said something about 2,400 beers and holding the Guinness Book World Record for bar 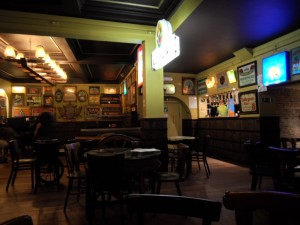 with the most beers.  And it was only ½ block from my hotel.  What a deal.  After checking in to the hotel, I walked around a bit.  I was in what seemed to be a downtown major area.  Lots of car-free walking roads, with shops and beautiful architecture around.  A lot of tourists, but for good reason because it was quite scenic.  As I slowly 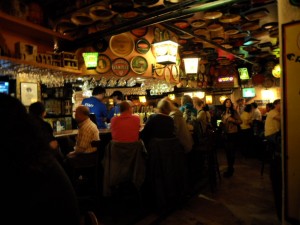 honed in on Delirium, the path went through narrow streets that were crowded with restaurants with sidewalk dining.  It seemed each one had some used car salesman type guy lurking outside fronting as a maitre d’ trying to lure you in.  Somehow I luckily must have given off an air of “don’t bother me, I’m not interested in eating at your restaurant” because they didn’t really bother with me, I just saw their techniques on other tourists.

The Delirium “complex” is in a good location, having all the storefronts in a narrow dead-end cul-de-sac type street.  They have 8 bars, all with related, but different themes.  The relation is alcohol.  I won’t repeat all the details and stats of all these places that specialized in beers, tequilas, absinthe, rum, etc. as you can find it here: http://www.deliriumcafe.be/.  I of course concerned myself with the main place, with 3 levels of beer.  The basement had the mega-book of something like 2,400 beers (in bottle).  I saw the book, but am kicking myself for not actually looking through it.  I figured why bother since I was drinking off tap. 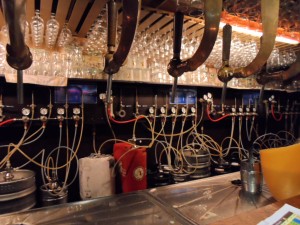 Anyway, on the main/ground floor was their “taphouse” that had 27 beers on tap, changing them every week.  The upper floor was called “The Hoppy Loft”, which had about 8 taps, and beers in bottle, supposedly specializing in hoppy beers that were mostly imported from the U.S., Britain, Norway.  I started off in the Hoppy Loft, having missed my American IPAs while drinking all the yeasty 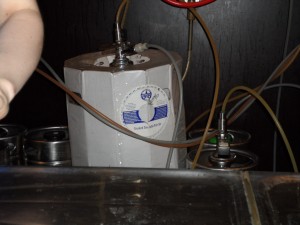 Belgian ales.  I was disappointed to find a collection of Belgian beers on tap (not hoppy), and one hoppy one from Dark Horse Brewery in Michigan (Special Reserve Dark).  I then went down to the main floor and tried a few Belgian beers on tap that I’d seen but hadn’t tried yet.  Equally disappointing as on bottle I found.  Of the 27 beers, 25 of them were Belgian, with 2 imports- Guinness, and Dark Horse Crooked Tree IPA. 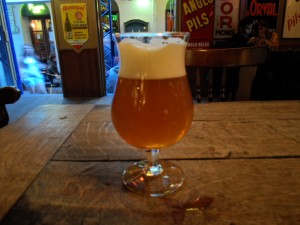 I thought that was pretty cool that Michigan was representing the U.S. there, so I ordered one.  It was the best beer I had since being in Belgium for 2 weeks.  I had a few more, then called it a night- happy.