In the middle of my 2-week business trip to Belgium, I had a free weekend.  At first I was contemplating seeking out one of the Trappist Monasteries that brewed/sold beer because that seemed pretty cool.  But then I thought about my recent evenings of failed attempts at finding a Belgian beer that I liked/enjoyed.  I imagined myself being at some monastery brewery with a really cool surrounding, but having more of that yeasty-tasting beer.  I couldn’t do it.

Knowing that Cologne was just across the border in Germany about a 1.5 hour drive away, I decided I’d pack up and head east for the weekend.  I’ve been in Cologne several times before, but that was back before I was a committed beer nut.  Since there are a few US craft beer Kolsch’s that I’ve had that I enjoyed, I figured I owed it a fresh look at the home of Kolsch.  Cologne has a nice downtown, with lots of winding streets, cool looking old buildings, tons of cafes and bars, and lots of good squares with tables to sit at and enjoy the surroundings.  The Saturday I was there, it was a really nice sunny summer day so the tables were overflowing with people smiling, laughing, and enjoying the day.

I started off at the

Fruh brewery, and got a spot at the bar with a view looking out the open doorwall onto the tables and crowds outside.  The efficiency of these places is downright admirable.  I’m not even sure if they asked if I wanted a beer on the first one, it just sort of magically appeared soon after I sat down.  And once the glass got low, another one would appear.  They’d take the empty, put another tally mark on my coaster and be off.  The glasses at first glance make you think they’re small.  But the 200 ml size turns out to be the perfect size to ensure the beer stays fresh and cool.  Also sized to be deceptive enough to make you think they’re small, so what could one more hurt?  Looking at the picture of this Kolsch, it appears pale and seemingly flavorless.  But in reality it’s actually quite tasty (in my beer review section).

I got out of there in time to avoid getting sucked in to drinking my day away perched on that stool.  I tried to find a place with Reissdorf Kolsch, which I found.  But it wasn’t nearly as satisfying.  Plus they gave me the “visitor sized” glass which was 500 ml.  It almost seemed grotesque.  So large that it didn’t seem as fresh and seemed like it was getting too warm by the end.  I guess you can’t win ‘em all.  But then I was off and up the road to Dusseldorf.

Dusseldorf is a different kind of city than Cologne.  It has a much bigger city feel to it.  I came to Dusseldorf for the beer.  After a week of yeasty Belgian beers, I was missing my American IPAs.  I knew Dusseldorf had its own style of beer, much like Cologne and its Kolsch, so after an internet search said “copper in colour, dry and with a long hoppy finish”, I was sold.  Dry sounded beautiful compared to the yeasty “wetness” I’d been experiencing, and “hoppy” reminded me of all my Michigan IPAs I was missing from home.  It was the best decision I ever made.  The Alt was beautiful- fresh, hoppy, nice healthy head on top, clean tasting, and addictive.  It was in a slightly larger size than the Kolsch in Cologne, something like 250 ml. 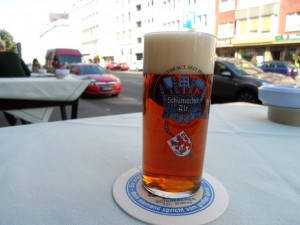 But it was similar service and proportional-right-sizedness.  They kept an eye on your glass, and as it got low, magically another glass appeared.  Marks were kept on the coaster again.  The 250 ml went down in the same ~3 minutes as the 200 ml of Kolsch because it was a little bit more delicious (at least to me).

My only bad experience of Dusseldorf was my own fault.  The large, big city feel of the town fooled me into thinking the city was laid out in a grid like Detroit.  Or close enough to a grid that I could roughly do an east-west-north-south thing.  Armed with a micro-map on the sleeve of my room key cardholder (more like an “artists interpretation” of a map), I headed out in the wrong direction.  I was thinking I was heading towards old town, but didn’t quite make it.  Along the way, I saw lots of young people dressed up crazy.  I was trying to figure out what the style was and why it was so prevalent.  Best I could describe it was people were dressed up like characters out of a Japanese anime.  Later, someone told me there was a Japanese Festival going on.  Oh, OK.  As luck would have it, I spotted a place that looked like a brewery across the street.  I pulled up a stool at one of the street-side tables, and in short order one of the brewery staff came out and delivered my first glass of delicious Alt.  After a few more, I felt recharged and ready to try again to find old town.

Further walking and more careful consideration of my artists map, I found my way there.  This part of town was packed with crowds.  The streets were pedestrianized, and pedestrians were making the most of it.  Lots of restaurants with tables outside, and the nice weather for Japan Day brought the crowds out.  I hit the next Alt brewery.  It was packed.  Lots of revelers enjoying the drink.  About every 10 – 15 minutes, there was a glorious  sound of an empty barrel being rolled back to the storeroom and a full one being rolled out.  From there, I walked around the festival (watching people carrying homemade scythes, dressed up like unicorns, and general ridiculousness).  Then down some more streets where I tried a couple different Alts.  By this time, I decided the first place I was at had the best beer, so I figured I’d return there to finish off.  This is where the afore-mentioned lack of north-south-east-west street grid comes into relevance.  I’ll give you the short story.  I got lost, 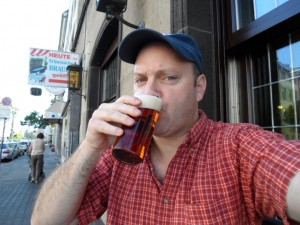 walked 5 miles trying to find the brewery,
ended up at a train station, took a cab back to my hotel to regain my bearings, then finally walked back to the first brewery.  The beer was worth the walk.