As my birthday was approaching, the wife suggested that we could go somewhere during the day since the kids would be in daycare/summer camp that day.  I’m sure she was thinking a nice summer patio lunch somewhere relaxing, and maybe a stroll through a park.  After about 30 seconds of thought, I knew what I wanted to do.  Our recent “tightening of the strings” on our spending meant I hadn’t been able to explore all the random new beer joints I’d heard or read about.  I shortly had a list of places in my head I wanted to go, and set about the task of stringing them together in some sort of logical progression.  Luckily some of them weren’t open during the day, and it got my list whittled down to a manageable length.  When Lora saw the schedule, she said, “You’ll be drunk by dinnertime!” to which I replied “Yeah, so?  It’s my birthday.  I’m allowed to be.”

We had to start off right with some nourishment.  I’d heard lots of people talk about the great beer selection and the BBQ here, so figured this was a good place to ease my wife/designated driver into

the whole “birthday beer tour” event.  We got there a little before noon, and as luck would have it Tuesdays were $2 beers or something.  You could opt for the 22 oz. for $3, which sounded fabulous to me– after all, it was my birthday!  The place was pretty quiet for lunchtime on a Tuesday, but they had a great beer menu.  It had a great exposed brick interior and giant bar in the middle.  However, I was a bit disappointed that the beers had a slightly sour taste to them, I 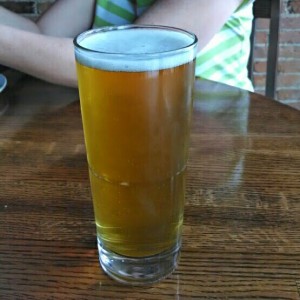 assume from draft lines that weren’t kept regularly clean.  I had a New Holland Full Circle and an Odd Side Ales Citra Pale Ale.  The food was OK, but not as great as a lot of other Detroit area BBQ joints.  The service was good and our server was efficient and friendly.  It’s too bad about the beer lines.  With such a great line up of beers, I had higher expectations.

A short trip down the road and we were at Arbor Brewing Microbrewery (until recently called Corner Brewing).  The inside of this place had a great feel to it with the high ceilings and a wide variety of seating options around.  They had some interesting sandwich/hot dog options, but since we had just ate, I stuck to the beer.  They had the usual Arbor Brewing beers here, and I had a Buzzsaw IPA.  I’d had this before, but had mix results from what I’d bought at the store.  It had been amazing the first time I bought it, and mediocre the other times.  Knowing that from the source it was

usually the best/freshest, I ordered one.  Jackpot.  It was delicious.
We relaxed on a comfy couch with a coffee table next to it.  If we had been in the mood, they had a bookcase full of stacks of boardgames.  This would be a great place to hang out and burn a whole afternoon.  There was a large outdoor beer garden area, but we stayed inside on the comfy couch.  The beer was so good and atmosphere inviting that I would’ve ordered another one, but we had more stops to go.  After all, this was a distance run, not a sprint today.

This place had a cool name, for sure.  Reading about it on their website, they sounded unique with their in-house smoked meats (jerky, bacon, pastrami, etc), all from local sources that treated their animals well (of course until they killed them and served them up for us to eat…).  Amongst their meats, they had some minimal offerings to enjoy while there.  They had 2 sandwiches (pulled pork, and I believe a brisket), and 2 beers on tap.  The beer was made on a 1- 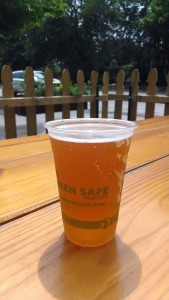 barrel system, so they made just enough for their store here and could change it up about every week.  We eyed up some bacon, beef sticks, and pastrami to take home, then I got a beer (Vienna IPA) to enjoy at one of the picnic tables out front.  It had the visual appeal of a kind of roadside rest stop you might find up North somewhere.  But the tables were a bit too close to the road and the constant flow of Ann Arbor traffic didn’t really help the atmosphere, it kind of distracted from it.  But I enjoyed the beer and the sun.  I then used their port-a-potty which was the fanciest one I’ve ever seen.  It had a little sink in there, had flowers hanging, doilies, different scented soaps, etc.  Truly amazing. 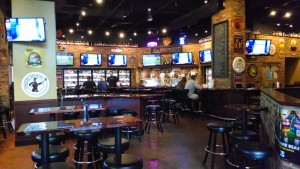 As we found a spot to park on the street, it was starting to look gloomy.  The close proximity of our parking spot would pay dividends on the way back.  The World of Beer was very close to campus.  The little short block of shops had everything you’d expect on a college 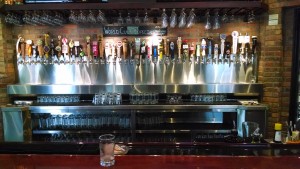 campus– bookstore, late night cookie delivery store, some fast food, and a bar.  But World of Beer is definitely more sophisticated than any bar I ever went to in college.  Rather than $0.50 drafts on some
rando 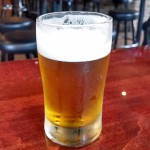 m weeknight, darkly lit, and rather smelly, WOB was the opposite.  Bright, open, and fresh looking, it was very inviting even though it was mostly empty.  They had a big draft menu (about 40 beers, and a ton of stuff in bottles/cans).  They had some interesting stuff on draft.  I tried the Southern Tier IPA on Nitro.  After all of the interesting bubbles went away, it tasted pretty good.  I also had a really good collaboration 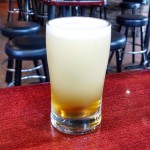 beer from 2 Fort Collins, CO breweries (New Belgium and Odell).  It was the only place I went to that gave me a birthday beer for free, which was cool.  But your free beer was a tasting size glass of a beer.  Which you could get free anyway, just saying you wanted to try a beer because you couldn’t decide what you wanted.  Either way, it was a nice gesture.  With the big windows facing the street corner, and the high ceilings, it made for a nice and open feel for hanging out and wandering through the beer menu.  I 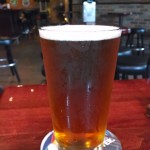 don’t know if on a more popular timeframe this would overrun with college kids or if it’s geared more towards professors and graduate students.  Either way, I finally made it here, and it’s a nice clean place to explore a variety of beers.

I had originally planned to hit Chelsea Ale House as the final stop, as that’s been on my list for awhile.  Unfortunately, all of my previous stops were conspiring against me and I took longer than planned at each.  Since we didn’t have enough time to go out to Chelsea, down a beer, then drive back and get the kids from daycare, we instead opted to hit the grocery store and get something for dinner.  Luckily that store was Whole Foods in Ann Arbor, and they had a craft beer bar in the middle of the grocery store.  So I enjoyed one more pint (of some Michigan beer I can’t remember right now) and walked around and “helped” pick out some good groceries for dinner.  Birthday beer tour drew to a close.