In college I wanted a kegerator.  But at that time, that meant a full-size fridge that could fit a full-sized keg (OK, technically it’s called a 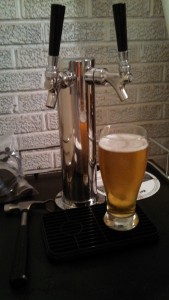 half keg) and had a tap running out of it.  At that time, the idea was party, party, party.  A big giant barrel full of beer that was always cold, and ready to go meant that surely a party could break out at any
moment for even the slightest of reasons.  I remember many a night of boring, frustrating homework sets being ended with a call to the fraternity house and finding out there was beer on tap downstairs.  That usually got us motivated for about 30 minutes longer of work then hurrying down the fastest path from the dorm to the house.

Fast forward to adulthood, and being a grown, responsible parent.  Somehow at some point, some ad caught my eye that had a little dorm-sized fridge with a tap head coming out the top and 2 spouts on it.  That image stuck in my mind.  Several weeks later, I got a bonus check of sorts from work and was feeling like I deserved spending it on myself for something.  I don’t normally treat myself with presents, as it seems my money is constantly going to boring things like food, utility bills, groceries, dance lessons for the kids, etc.  So I had these 2 thoughts bouncing around in my head simultaneously, unbeknownst to me.  After a few days, the 2 ended up on the same bounce trajectory and I came up with the idea of spending some of the bonus money on buying myself that kegerator with 2 taps.  I searched the internet to find those pictures again and saw that the kegerators I was looking at held 2 smaller 1/6 barrel kegs.  That’s 5.16 gallons of beer, or roughly (60) 12 oz. servings- but if you’re drinking from a keg, why constrain yourself to artificial limits imposed by the lesser vessels of cans & bottles?

Anyway, with the smaller size of the kegs, I wouldn’t feel like I had gobs of beer hanging over my head needing to be “taken care of”.  And some brief internet research said that once tapped, and kept on CO2, the beer will last for several months.  With the dual taps, I decided I could get one keg and use for homebrew (possibly resurrecting my meager homebrew career), and the other I could buy 1/6 barrels of good craft beer.  I could just buy the good stuff that I already had and wouldn’t need to experiment with 6-pack roulette constantly.  I’d always have a supply of something really good on tap, and then in bottle I could have the new/random stuff to cycle through and try out.  With the side benefit of re-inspiring my homebrewing, it sounded like it couldn’t lose.

I bought from an online store that let me configure the fittings of each tap connection so I could have one for the homebrew kegs, and one for the commercial kegs.  It arrived and I excitedly set out to put it together.  It came with 2 sets of instructions on assembly.  One from the manufacturer, and one from the retailer that I bought it from.  I meticulously read both sets of instructions, wanting to be sure to not put this special piece of equipment incorrectly.  So I slowly started off in the assembly sequence.  About half way through, I started getting stuck.  One set of instructions said to specifically assemble in one order, and the other said to do it in another order.  Both gave reasons as to why it was important.  I was stressed.  Which one was right?  After bouncing between the 2 back and forth, I suddenly realized this was making it all too complicated.  It was only a few plastic hoses with fittings and screw clamps.  I didn’t need instructions on how to put those together.  So when I stopped trying to read and just put it together, it went much quicker and I was done.

After a couple commercial kegs and one homebrew keg, I can tell you it’s a success.  It’s working out exactly as planned.  I haven’t fully cleared the backlog of my leftover 6-pack experimental purchases gone wrong yet, but knowing I have a good trustworthy beer on tap, I don’t feel obligated to buy a 6-pack or two every time I come across a good beer selection in a store.  So in a round about way, I guess it’s probably saving me money.  The 1/6 barrel of craft beer is roughly the same price for that same beer buying by the 6-pack in bottles, so you don’t get a direct savings like you would if you had a full ½ barrel of a high volume beer like Labatt’s or something.  But I never bought it with the intention of saving money, it was just to add some fun, cool variety to my beer at home.  And I’m a happy camper.