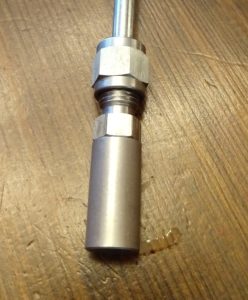 Not sure I totally understand the science behind that, but it’s simple enough for me to just accept it.  These 2 stones have different cleaning methods specified.  For the 0.5 micron stone, I was told I had to boil it to sanitize it, whereas the 2 micron stone could be soaked in StarSan.  Here’s where I didn’t follow the advice that came on the packaging.

I assumed the boiling recommendation was just a product of over-zealous contamination-paranoid homebrewers, the likes of which are disassembling their 3-piece ball locks in between brews to scrub and boil.  So I blew off that recommendation and just sprayed the stone with my spray bottle of StarSan solution.  I figured it worked for everything else, and I personally had never experienced a contamination/sanitation issue.

I then found after brewing a couple of batches where I used the 0.5 micron stone, that the beers developed a sweetness to them after being in keg for a few weeks.  This was present across several beer and yeast types (Pilsner, Black Lager, IPA).  It wasn’t until my IPA had the same sweetness that I made the connection to my shortcut sanitation process on the oxygen stone.

Suddenly the cleaning process made sense to me.  The small pores in the stone were small enough that my spray of StarSan was only going to get to the outside surface.  By boiling it, I heated up the whole thing- inside and out- and the temperature could then kill off whatever wild yeast/bacteria had taken up living in it in between brews.

So now I boil the stone for a couple minutes.  And I can no longer tell people that “I personally have never had a contamination/sanitation issue.”