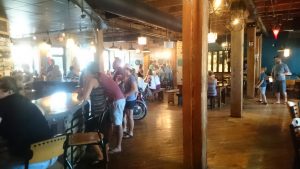 Last summer we were in Grand Haven and I tried to find Odd Side Ales taproom.  Even with GPS and Google Maps, I couldn’t find it.  I mean I didn’t try my hardest, as I was exploring with my young children, but when I looked down the street where I thought it should be I didn’t see anything.

This year, I was more determined.  I pressed on down the side street even though it didn’t look like anything was there.  As I got halfway down the block, I noticed a non-descript sign above the door into a building and a small outdoor fenced in patio.  I found it. 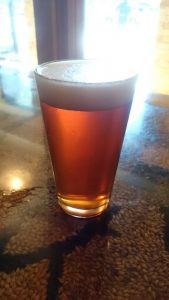 Inside, there is a very homey, welcoming spot.  Tables of all sorts and sizes, and a giant L-shaped bar.  We made our way in and surveyed the sizable tap menu to make choices.  Although I’d generally consider myself a fan of Odd Side Ales, I can’t really tell you the last time I bought a 6-pack of something of theirs.  But in the taproom I tried a few different things and was impressed.

There was an amazing IPA (which I took notes from the menu on what hops were in it for future recipe creation), and a mediocre lager.  My mom tried the cinnamon cider and it was really nice.  Tasted like drinking apple pie. 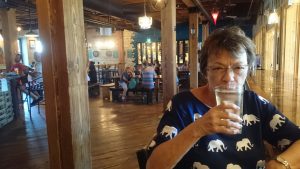 Grand Haven as a beach town, and it being summer, there were a lot of families here.  Although the taproom serves no food (minimal snack options), they did have their own root beer on tap.  And the overall feel and atmosphere was very laid back and welcoming.  No one was upset to see a table with a bunch of kids next to them, and kids seemed just content to come in out of the sun and sand and were content even without TVs, video games, or anything obvious to entertain them.

Very cool place and worth it for the atmosphere, and the beers were really good.  Now that I know where to find it, I’ll definitely be back!