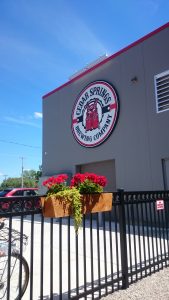 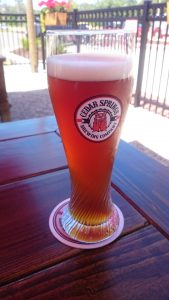 I attended a seminar a few months back, where the owner of Cedar Springs Brewery talked about his path towards opening his own brewery.  It was a very interesting story that involved time working in a brewery in Germany and wanting to bring some of that German beer hall feeling (and beer) to Michigan.  Following that, sampling some of their beers at the 2016 MI Winter Beer Festival for the first time, they were outstanding.  I knew I had to make a visit. 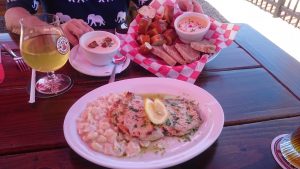 So, on the way out to the west side of the state for some family vacation time, we made a detour north of I-96 and traveled to the small town of Cedar Springs just prior to the 4th of July.  Cedar Springs is a small town, and driving past all the closed stores and quiet main street on Sunday afternoon, I was concerned we’d find the brewery closed.  But not so.

What I did find was the lack of 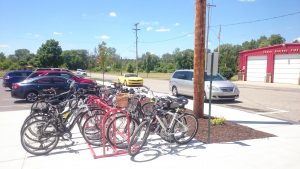 cars on the road was more than made up by the number of bikes on the nearby “rails to trails” bike path that detoured over for some food and drink.  Cedar Springs has a big room in the front of the building with numerous tables and grand open-air windows facing the main street, but also a very nice patio area out back with giant picnic tables with nice big umbrellas to shade you from the sun’s rays. 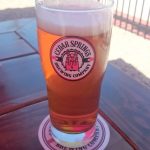 We sat out back and ordered beers and food as it was an awesome Michigan summer day with lots of blue sky, sun, and temperatures just shy of the point where you really start to sweat.  While sitting there, we saw the constant flow of bike traffic in and out.  It ranged from people in their bike Speedo shorts and “competition” jerseys, to families with tag-along bike attachments for their youngsters, and all ages/sizes in between.  In all seriousness, the bike rack was at capacity, while the parking lot still had tons of open spaces.

The food was very good 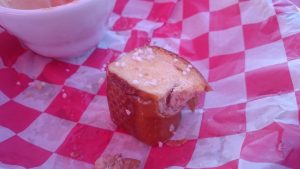 (particularly the pretzel appetizer and the bread pudding desert), and the beers very good as well.  Their menu is split between American choices (food and beers) 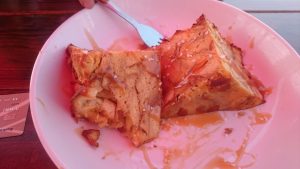 and German choices (food and beer).  We opted for the German fare for food and beer.  The beer was really great with a nice malt taste, but very clean and light flavor to go down well. 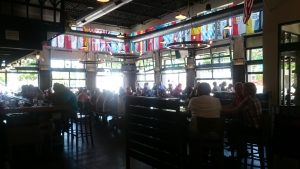 I must say, this place is awesome.  I was imagining what it must be like for Oktoberfest.  But I also found myself curious about the American side of the beer and food menu.  I definitely think this needs more study…