About a year ago, I decided to buy a grain mill and crack my own grains.  I figured if I tried to explain it to anyone they’d think I was crazy spending $100 for a grain mill to add another labor step to my brew day preparation when the homebrew shop would do it for free.  At the time I did it because I was feverishly trying to sort out my grain conversion efficiency.  I had a particular batch that had a low conversion efficiency, and after inspecting the spent grain after mashing I noticed a lot of the kernels were still intact, and hadn’t even been cracked.  I decided if I really wanted to be in control of what was going on, I couldn’t be victim to whether or not my grains were fully cracked coming from the homebrew shop.

Ever since making that decision, I’ve felt it was money well spent as I felt more in control of the whole process (which is partly what drives us all to move from extract to all-grain to begin with).  While cracking a batch of grain recently for a Scotch Ale, I would crack the grains and inspect to make sure I was getting a good crush- cracking all/most of the hulls but not turning things to powder.  All was going well as I worked through Munich, White Wheat, and Smoked Wheat.  But when I went through the Golden Promise, I found that maybe only 50-60% of the kernels were cracked. 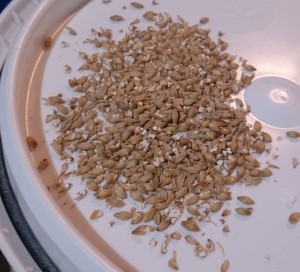 I adjusted the roller to do a finer crush and re-processed it all.  In hindsight, if I was smart, I would crush all of a given grain in a bucket then then after inspecting the crush move it over to the brewday grain bucket.  But in this case, having not learned that lesson yet, my half-cracked Golden Promise sat on top of the rest of my nicely crushed other grains.  Having no option but to crush it all again on the finer setting, it all went back through the mill.  I got a nice crack on the Golden Promise, but a lot of the other got broken up into very small bits. 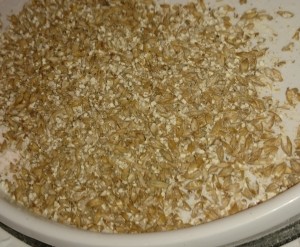 I added some rice hulls to help avoid a stuck mash with such a fine crush and was prepared for brew day.

Had this batch come through my LHBS, I’m sure it would’ve all been run through a fixed roller setting and I’d be stuck with low conversion efficiency.

While cracking this batch of grains, I found another reason cracking your own grains is worthwhile.  Frequently while going through this 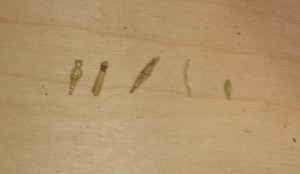 grain processing you find little bits of bonus grain bits that you can filter out (grain stock other than the kernel), but this time I found an unknown hop pellet sitting in my package of grains. 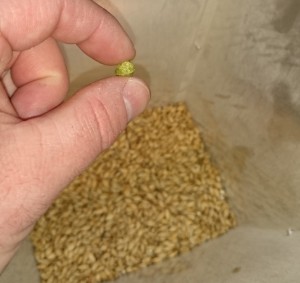 I have no idea what type it was, how old it was, etc.  I just know I was glad I found it and it didn’t get ground up to be a bonus/mystery flavor in my Scotch Ale.  Making a small 2.5 gallon batch that was also low in IBU, one hop pellet could make a noticeable difference.