Having sadly missed the Michigan Winter Beer Festival, we decided to plan a “make-up” trip.  We needed something to substitute the overnight stay out of town combined with craft beer.  Having visited Bells before on a brewery bus tour, and of course loving my favorite Bells beers, I thought a trip to Kalamazoo would be good.  There was also an interesting beer bar I had read about a while back and had been wanting to try.  After checking into our Residence Inn hotel on the edge of town, we were trying to get them to call us a cab when we found that they had a hotel shuttle which would be glad to run us into town- for free.  Needing to kill a half hour before the shuttle driver came on shift at 4:00, we naturally decided we should have a beer.  Luckily, I had brought a couple along in a small cooler just in case.  “Always be prepared”, I learned in the Boy Scouts.  And I’m certain that was exactly the type of scenarios the slogan creators had in mind when they came up with it.  After all, what goes more naturally with camping in the woods than drinking beer?  Of course we weren’t camping in the woods, but I was using the Boy Scout slogan there, so I felt I should try to draw some loose kind of connection…  Anyway, the shuttle driver came on shift and we caught a ride downtown.

First stop was the Kalamazoo Beer Exchange.  The premise of the place sounded much cooler than it was in practice.  They had about 30 beers on tap at the bar on the lower level.  On the upper level was their restaurant seating.  We of course sat at the long bar downstairs.  It was a good beer menu.  The gimmick was the prices of the beers went up or down based on stock-market-like principles that whatever was in high demand and being bought, the price would go up.  Whatever was not being bought, would drop in price.  It sounded like a fun drinking game built into a bar.  That’s what lured me here.  Of their extensive beer menu, there was only a couple that I really wanted, so when we found the stock ticker didn’t start running until 6:00, I realized I had made a planning mistake.  We’d have to drink beers for about 2 hours until the stock ticker started.  And then the prices didn’t adjust continually in real time, but adjusted every half hour.  Since this was the whole premise of why we came to this spot, we had to sit it out through at least one price change.  So from a planning perspective, I wished I had planned to start at Bells first.  So we sat there watching the clock, waiting for the exchange to start in a fairly quiet time on Saturday afternoon, wasting my BAC on average beers, when I really wanted to be over at Bells trying all their experimental IPAs.  But we made it through, then made the short walk over to Bells.

After stopping at their logo wear store first, and scoring some good gear, we went to the Eccentric Café (what they call their brewery bar).  The inside was busy and full, so we headed to the outside garden area.  They had 2 quite large areas with picnic tables and the like outside, with the far end of one of those areas looking like it had an outdoor concert stage.  We had sandwiches and a couple of beers (that of course were delicious) while sitting outside.  As it drew later, 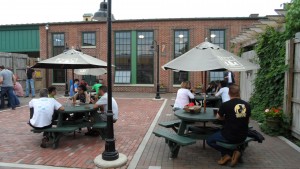 we saw they had another room inside that was like a small concert hall.  They had a band playing and they were charging something like a $10 cover.  We didn’t want to pay the cover, but wondered if we could just walk in like we were supposed to be there.  Didn’t work, and the guys at the door saw through what was probably a very common tactic and shut us down.  At that point we had already left our seats outside and the place was getting more crowded, so we decided to wander.

First stop was at a place called Shakespeare’s Pub.  They had an upstairs and downstairs in a long building.  We hit the basement first as there was a band playing- for free.  They were pretty good, playing kind of 80’s punk rock/alternative.  They had a few decent offerings on tap.  The music was really loud, so we left after our beer and headed upstairs.  Upstairs had many tables and booths with an interesting old diner type of décor.  There was a massively long bar running through the middle of the place, and they had tons of taps.  Maybe something like 40 taps.  They also had a large outdoor patio seating area with picnic tables.  The tap list was really good, and I was lamenting again all that wasted BAC at the Kalamazoo Beer Exchange that even if I hadn’t been soaking up Bells Experimental IPA batches, I could have been at this place which had several very good beers I was interested in.  Oh well, such is life.

Sitting outside on the patio, we could see this ~10 – 15 story office
building a couple blocks away that had an alluring blue-ish neon glow from its rooftop where you could also see this white canopy tent top.  Since my ability to sit and drink and enjoy a great tap list had left me about an hour ago, we decided we’d go check this building out.  It turned out to be an interesting bar complex, with 3 or 4 different themes on various floors.  We went to the top via the elevator and ordered some drinks while enjoying the rooftop atmosphere.  It started to sprinkle so we huddled with the others underneath the massive white cool-whip-looking tent top.  As the rain picked up in intensity, people by the hordes started to crown the elevator bank to 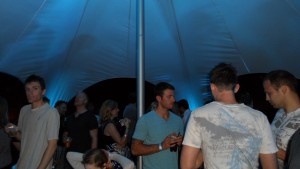 bail on their rooftop adventure.  That turned out to be good for us because as the wind picked up a bit, the rain started to angle in under the edges of the tent so we needed to mover more towards the center.  We had a good table and some comfy chairs, and pretty much our own personal bartender since everyone had mostly cleared out.  So we sat up there for awhile before deciding to explore the other levels.  One of the levels I think was closed, but we hit the “red room” which everything was red or hot pink in color and was playing rap music.  The place was packed.  We did a bit of people watching, then went to the other area which was the “normal bar” area where you came into the place through.  We were able to get a seat at the bar and figured we’d have another drink, listening to the music.

When ready to go, we pulled out the phone number to call the trusty hotel shuttle.  The college kid who drove us there was quite friendly and said that his shift ended at midnight.  But since he lived about a block from the hotel, if we were out later, we could just call him on his personal cell phone and he could walk over to the hotel, get the minivan, and come pick us up.  Very cool we thought.  Kevin & Ivan both independently thought, “I’ll give this guy a good tip to make sure he’s available to come pick us up later.”  So when he dropped us off at the Kalmazoo Beer Exchange, they both produced $10 at the same time.  So the guy got $20.  Surely locking in our after-midnight call for a ride back.  Not so.  No answer at the hotel shuttle phone number, or his personal cell he gave us.  So our great find of a free hotel shuttle turned out to be a $20 taxi ride into town.  And we had to call a taxi to take us back to the hotel in the end- that cost us less than $20.  So in the end, I learned several things I would do the same, and some I’d do different for my next Kalamazoo beer overnight trip.