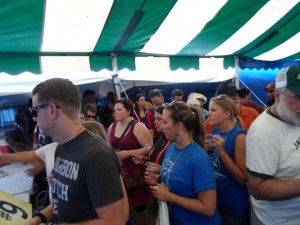 This was the 15th annual summer festival, coincidentally, the Brewers Guild has been around for 15 years.  You may wonder why I know this, as I would wonder why I knew that as well.  The beer festival was loaded with breweries that had their version of the 15th anniversary brew.  Supposedly they were all versions of a Wheat IPA, and each brewery did their own interpretation of the same recipe- many with Michigan hops and Michigan malted hops.  I sampled a few of these, and they were all quite good.  As usual, the weather at the festival was great Michigan summer weather- warm & sunny and not too hot.  Our bus trip was not quite up to par as we were disappointed to find when we got on board that there was no keg of MI craft beer.  At first I thought, “No big deal.  Not like I need to drink beer on the way to a beer festival.”  But then they guys about 2 rows behind us started passing cups of beer up to their buddies that sat in the 2 rows in front of us.  Each one looked delicious and as we inched our way through one traffic jam after another, each subsequent one looked better than the last. 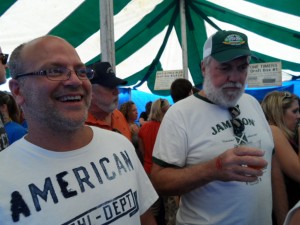 According to the statistics on the brochure, there were 62 breweries on hand, and over 500 different beers.  It was the typical layout of tents, various stand-alone bars, etc.  The one exception to the typical was Dark Horse Brewing.  They had a secret little cave-like tent set up with air misters going on the inside.  With blue tarp walls up to
provide extra blockage against the sun, it was a cool respite from the hot sun.  Inside they had good tables going with lots of the usual good stuff- and more.  Without counting  (because I don’t want to be bothered), I’d say there were about 30 different brews available. 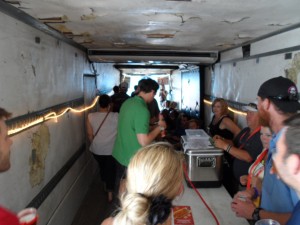 But that wasn’t all.  After working your way to the back, there was a staircase going up into a refrigerated trailer.  In the trailer there was
jamming hard rock, another beer table, and best of all- an ugly-patterned old couch and a couple of armchairs.  They were nice and broken-down like reminded me of something we’d have picked up to decorate the living room in the fraternity in college.  We took a couple tours through a couple times until finally scoring a couple of prized seats on the couch.  It was great fun, having one of the 5 a 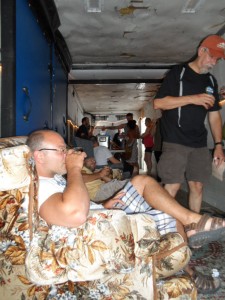 vailable seats as hundreds of people streamed by and looked on jealously like we were the kings of the festival.  We of course gave up our seats to some people that looked worthy, and went on about our exploring.

So on to my ratings.  One thing that struck me as odd was that all the usual favorites just didn’t seem to be hitting the mark.  After disappointment after disappointment, I was worried I was going to be doomed to a day of mediocre beer for some strange reason.  But luckily a few old favorites pulled their weight, and I came across a few other good ones.