I went to Belgium on business for 2 weeks.  We stayed in a town in the northeastern corner called Hasselt.  It was a nice town with nice “pedestrianized” streets blocked off from traffic weaving around to and fro throughout the town amongst dozens of shops, interesting restaurants and bars.  I was also lucky enough to have been staying in a hotel near a great beer bar, called Hemelrijk in Hasselt.  A short 5-minute stroll down the meandering cobblestone roads led me to this place.  I found it listed in Wikipedia on a discussion of Belgian beer, and of course found the place was already well-known by colleagues from work, passing on the info via word of mouth from traveler to traveler.  It was one of those places that felt like it was your own personal discovery of the town’s well-kept secret.  But the frequent crowds and large turnover of customers suggested otherwise. 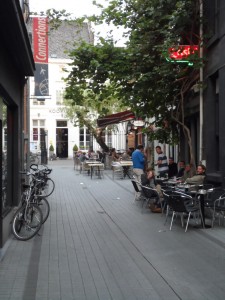 The place had a very cool feel on a quiet, semi-dead end corner with tables sitting outside to allow enjoyment of the outside air while drinking your favorite brew.  Inside was a scattering of various tables in a few different rooms, each room quite interesting and almost historical looking.  The place was impeccably clean.  A fairly large bar made up the main room, with giant bookcases behind the bar with hundreds of different beer glasses.  Apparently in Belgium, you can’t really say you brewed your own beer unless you likewise have your own glassware created for it with a unique shape and your own beer logo on it.  So of course a place like Hemelrijk, with 300 different beers in bottle (oh, and 3 on tap, too), you need a lot of shelves to store all that glassware.  I suppose this is a bit of an exaggeration because there wasn’t a 1:1 ratio of beers to glassware, as some of the beers I tried didn’t have a matching glass, but it was pretty close to 1:1.  I’m sure they loved me as I tried one, then a different one, and then a different one, all the while creating my own pile of dirty glasses for them to wash.  But that’s okay because they got to benefit from my overly-generous American tipping.  This was a combination of bad habits dying hard (used to tipping in the bar), and all this funny-looking money that you can’t exactly tell what you’re giving them.

They had a nicely bound book/menu that sat around on tables and the bar for you to peruse to select your beer.  Each one listed its color, ABV, and a few words about what its main tastes were.  They were also organized into 3 or so major categories, plus a small selection of mass-market stuff (Budweiser, Guinness, etc).  The menu was a challenge that I dove into.  I felt like a WWII code cracker as I would take the beer that I liked, study the Flemmish/Dutch words describing the taste, and try to find another beer listed that used some of those same words.  Some of the names of the beers also helped as they were partially English, or English-sounding anyway.  I found a few that I enjoyed, although most of them didn’t really hit the spot for me.  There’s a specific taste to the Belgian beers, I think it’s the yeast type used combined with the bottle conditioning that leaves that yeast in every bottle.  I know there are some that like that flavor, as much as I love the taste of super-strong hops in American IPAs.  Although none of the beers made me really excited, the experience was great sitting in the place looking at all the glassware, studying a menu I couldn’t read for hours, and playing Belgian Beer Roulette.